Trump Pulls US Out Of Iran Nuclear Deal, Obama Calls It 'Serious Mistake' 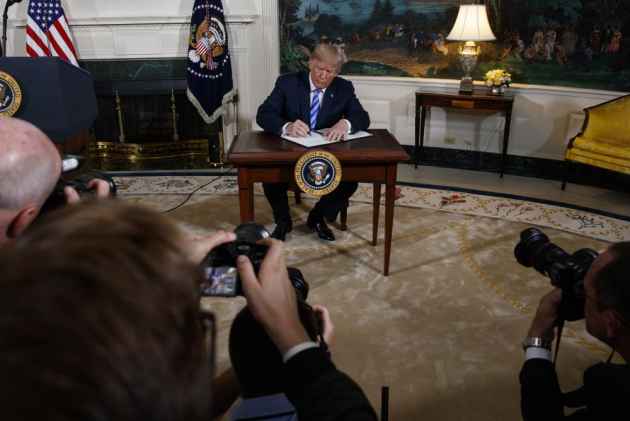 President Donald Trump has announced US withdrawal from the 2015 nuclear deal with Iran.

"It is clear to me that we cannot prevent Iran nuclear bomb. The Iran deal is defective at its core. Therefore, I am announcing today that the United States would withdraw from the Iran nuclear deal," Trump said.

Moments later he signed fresh set of sanctions against Iran and warned countries against any cooperation with Tehran on its controversial nuclear weapons programme.

The "disastrous" deal gave Iran millions in cash and did not prevent it from acquiring nuclear weapons, he said.

Reacting to the decision, former President Barack Obama said, "There are few issues more important to the security of the US than the potential spread of nuclear weapons or the potential for even more destructive war in the Middle East. Today's decision to put the JCPOA at risk is a serious mistake."

In reversing the signature foreign policy accomplishment of his predecessor Barack Obama, Trump by taking this decision ignored advice against such a move from his key European allies and top US Democratic leaders.

Describing this as a bad deal, Trump said that the nuclear deal is unlikely to prevent Iran from acquiring nuclear weapons.

Before Trump's announcement in this regard, which was televised live, top administration officials including Vice President Mike Pence informed Congress about his decision.

"The Iranian promise of abandoning its nuclear weapons is a lie," Trump alleged.

Allowing the deal to stay would result in an arms race in the region, he said, adding that the deal does nothing to constrain Iran's "destabilising behaviour".

Ever since his election campaign, Trump has frequently criticised the Obama-era Iran nuclear deal, also known as the Joint Comprehensive Plan of Action or JCPOA.

He had described the agreement, which was negotiated by then US secretary of state John Kerry, as a bad deal.

The Iran nuclear deal was reached in Vienna in July 2015 between Iran and the P5 (the five permanent members of the UN Security Council) plus Germany and the European Union.

Trump's decision would have global ramifications, straining Iranian economy and heightening tensions in the Middle East.

Referring to his consultation with key American allies, Trump said it is that they cannot prevent an Iranian nuclear bomb under the "decaying and rotten" structure of the current agreement.

"If we do nothing, we know exactly what will happen. In just a short period of time, the world's leading state sponsor of terror will be on the cusp of acquiring the world's most dangerous weapons," he said.

"We will be instituting the highest level of economic sanction. Any nation that helps Iran in its quest for nuclear weapons could also be strongly sanctioned by the United States. America will not be held hostage to nuclear blackmail. We will not allow American cities to be threatened with destruction, and we will not allow a regime that chants 'Death to America' to gain access to the most deadly weapons on earth," Trump said.

Announcing to terminate the JCPOA, Trump said the deal allowed Iran to continue enriching uranium and over time reach the brink of a nuclear breakout.

"The deal lifted crippling economic sanctions on Iran. It exchanged for very weak limits on the regime's nuclear activity and no limits at all on its other maligned behaviour," he alleged.

"In theory, the so-called Iran deal was supposed to protect the United States and our allies from the lunacy of an Iranian nuclear bomb, a weapon that will only endanger the survival of the Iranian regime," he said.

Alleging that the heart of the Iran deal was a "giant fiction", that a murderous regime desired only a peaceful nuclear energy programme, Trump said the US has definitive proof that this Iranian promise was a lie.

"The fact is, this was a horrible one-sided deal that should have never, ever been made. It didn't bring calm, it didn't bring peace, and it never will," he said.

"In the years since the deal was reached, Iran's military budget has grown by almost 40 per cent while its economy is doing very badly. After the sanctions were lifted, the dictatorship used its new funds to build nuclear-capable missiles, support terrorism and cause havoc throughout the Middle East and beyond," he said.

"The agreement was so poorly negotiated that even if Iran fully complies, the regime can still be on the verge of a nuclear breakout in just a short period of time," he noted. "The deal's sunset provisions are totally unacceptable. If I allowed this deal to stand, there would soon be a nuclear arms race in the Middle East. Everyone would want their weapons ready by the time Iran had theirs," Trump said.

Making matters worse, the deal's inspection provisions lack adequate mechanisms to prevent, detect and punish cheating. And don't even have the unqualified right to inspect many important locations, including military facilities, he said.

"Not only does the deal fail to halt Iran's nuclear ambitions, but it also fails to address the regime's development of ballistic missiles that could deliver nuclear warheads," he said.

"Finally, the deal does nothing to constrain Iran's destabilising activities, including its support for terrorism. Since the agreement, Iran's bloody ambitions have grown only more brazen," Trump said.