The 62-year-old former intelligence official, who served in the previous Obama administration, has been one of the staunchest critics of President Trump and his policies. 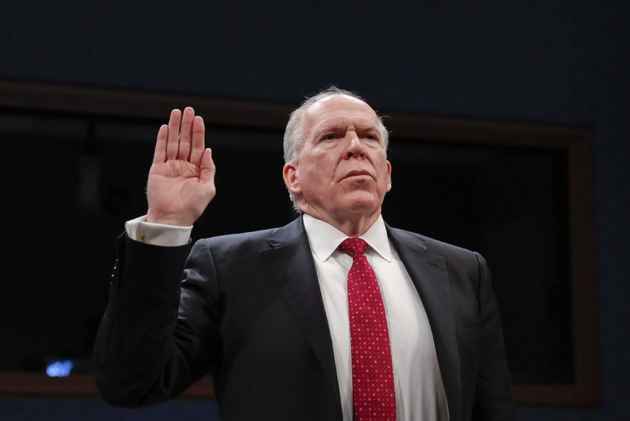 US President Donald Trump has revoked the security clearance of former CIA director John Brennan, accusing him of "lying" and blaming his "erratic conduct and behaviour."

The 62-year-old former intelligence official, who served in the previous Obama administration, has been one of the staunchest critics of President Trump and his policies.

White House Press Secretary Sarah Sanders read out a statement from Trump during a press briefing yesterday in which the President said he has decided to revoke Brennan's security clearance since he recently has "leveraged his status as a former high-ranking official with access to highly sensitive information to make a series of unfounded and outrageous allegations, wild outbursts on the Internet and television, about this administration."

Brennan tweeted that his security clearance being revoked is part of a broader effort by Trump to "suppress freedom of speech and punish critics. It should gravely worry all Americans, including intelligence professionals, about the cost of speaking out. My principles are worth far more than clearances. I will not relent."

When Trump addressed Newman as "that dog" in a tweet, Brennan replied it is "astounding how often you fail to live up to minimum standards of decency, civility and probity. Seems like you will never understand what it means to be president, nor what it takes to be a good, decent and honest person. So disheartening, so dangerous for our Nation."

Trump said in the statement that historically, former heads of intelligence and law enforcement agencies have been allowed to retain access to classified information after their government service so that they can consult with their successors regarding matters about which they may have special insights and as a professional courtesy.

"Neither of these justifications supports Brennan's continued access to classified information. First, at this point in my administration, any benefits that senior officials might glean from consultations with Brennan are now outweighed by the risks posed by his erratic conduct and behaviour.

"Second, that conduct and behaviour has tested and far exceeded the limits of any professional courtesy that may have been due to him," the President said.

Trump added Brennan has a "history" that calls into question his "objectivity and credibility.

He cited a 2014 incident when Brennan had denied to Congress that CIA officials, under his supervision, had improperly accessed the computer files of congressional staffers and had told the Council of Foreign Relations that the CIA would never do such a thing.

"Brennan's lying and recent conduct, characterised by increasingly frensied commentary, is wholly inconsistent with access to the nation's most closely held secrets and (facilitates) the very aim of our adversaries, which is to sow division and chaos," Trump said.

"Security clearances for those who still have them may be revoked, and those who have already lost their security clearance may not be able to have it reinstated," Trump said in the statement read out by Sanders.

Asked if Trump is targeting his political critics by revoking their security clearances, Sanders replied in the negative.

"No. If there were others that weren't, that we deemed necessary, we would certainly take a look and review those as well," Sanders said when asked if Trump is going after his political opponents.