"Mike Pompeo, Director of the CIA, will become our new Secretary of State. He will do a fantastic job!" Trump tweeted. 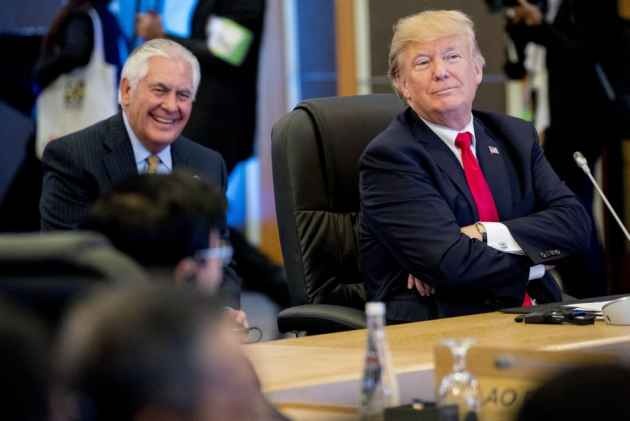 US President Donald Trump today fired his Secretary of State Rex Tillerson, who is currently on a visit to Africa, and replaced him with CIA Director Mike Pompeo.

"Mike Pompeo, Director of the CIA, will become our new Secretary of State. He will do a fantastic job!" Trump tweeted, in a surprise announcement.

The position, however, needs to be confirmed by the US Senate.

"I am confident he is the right person for the job at this critical juncture. He will continue our program of restoring America's standing in the world, strengthening our alliances, confronting our adversaries, and seeking the denuclearization of the Korean Peninsula," Trump said in a statement issued by the White House.

"His experience in the military, Congress, and as leader of the CIA have prepared him well for his new role and I urge his swift confirmation," the US president added.

"A great deal has been accomplished over the last fourteen months, and I wish him and his family well," he said.

Tillerson, 65, the former chairman and CEO of Exxon Mobil was appointed last year on February 1. He had never previously held political office.

The former oil chief forged multibillion-dollar deals with Russia's state oil company, Rosneft, and was awarded the Order of Friendship by the Kremlin in 2013.

Trump also announced the appointment of Gina Haspel, the Deputy Director of the Central Intelligence Agency, to head the agency -- the first woman selected for the top post.

"Mike and Gina have worked together for more than a year, and have developed a great mutual respect," Trump said, terming her elevation as "a historic milestone".

"Gina Haspel will become the new Director of the CIA, and the first woman so chosen. Congratulations to all!" he tweeted.