Turbulence In The Tory Camp 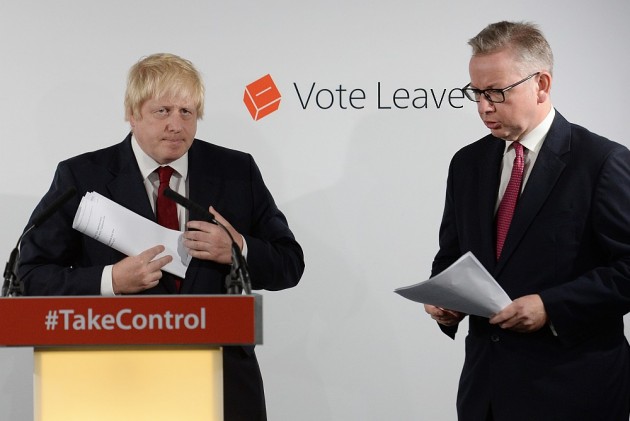 Half an hour is a long time in politics, that has been the theme of the day for Conservative politics. The stage was set for shocks and twists and turns, but within hours several Shakespearean tragedies were played out simultaneously, from Macbeth to Julius Caesar to Hamlet.

Stephen Crabb, Secretary of State for Work and Pensions who was nominated by Business Secretary Sajid Javid was the first to express his decision to contest the election for the Tory leadership. This was followed by Home Secretary Theresa May's announcement wherein she made it clear "Brexit means Brexit".

The biggest shock of how treachery and machinations played out came with the shocking announcement by Michael Gove that he will stand as well, with the statement: "I have come, reluctantly, to the conclusion that Boris cannot provide the leadership or build the team for the task ahead", in the wake of which Boris Johnson declared that he would no longer stand in the leadership contest. By midday it was clear that the Brexit camp was splintered.

There are rumours suggesting Rupert Murdoch favoured Gove. A YouGov poll in The Times on Thursday suggested Theresa May was ahead of Johnson. Of course Gove was not even included in the poll as Gove was known and seen as Johnson's campaign manager. As commentator John Rentoul wrote: "What does Gove offer, apart from being charming, clever and socially concerned? He is the candidate of Paul Dacre, editor of the Daily Mail, and Rupert Murdoch, owner of The Sun and The Times. That is not a great pitch."

On Wednesday, a leaked email gave a lot away well before the final announcements by Gove and Johnson. It was an email from Michael Gove's wife Sarah Vine, where she wrote that Dacre and Murdoch 'instinctively dislike Boris but trust your ability enough to support a Boris-Gove ticket'.

Gove is now being seen as a backstabber for his utterly brutal knifing and as Sean Worth MP, former advisor to David Cameron said, "Questions of character will be put to him a lot." Chris Grayling, House of Commons leader expressed his shock at Gove's change of mind after having always maintained he would never stand for a leadership contest. He had gone to the extent of saying he was ready sign on a parchment with blood that he would not. So what happened? Johnson's column in The Telegraph on Monday is believed to have upset Gove, calling it 'sloppy and inconsistent', adding to which he believed Johnson was diluting various Brexit principles.

There was pin-drop silence as a room full of journalists and 30-40 MPs supporting Johnson were left aghast when he made the announcement that he was not standing. It was clear that the shocking 'punch line' of his statement was written in the last 10 seconds before he made his statement, an obvious fall-out of Gove's announcement. It was clear Johnson decided, once some from his camp began flipping sides, and Johnson's rating began falling.

Several shocked Johnson-supporting MPs said that late Wednesday night in a meeting with Johnson and Gove it was clear that Johnson was the candidate and even a time for the announcement was decided. It seems Gove had a late night change of heart, and the most treacherous act was that he called Lynton Crosby, Johnson's campaign manager to tell him his intention. He did not think it necessary to even call Johnson. The other leadership candidate Andrea Leadsom, energy minister and a Leave campaigner expressed her 'utter' shock at Gove's move. Liam Fox is another Tory Leave campaigner who has also thrown his hat in.

The sudden surprises have changed the dynamics of the contest. Theresa May now appears to be the favourite for Prime Ministership, even though she has been a Remain campaigner. After Johnson walked out of the contest, Gove, although popular in the party, has lost his moral authority because of his betrayal. May, on the other hand, watered down opposition against her by announcing that she will put a senior Leave figure for the Brexit negotiation. With 80 plus nominations, she is seen as a serious politician who succeeded in deporting Abu Qatada, a task her predecessors have failed to do.

It is still early days. There is a history of the most popular candidates often not coming out the winner as was in the case of Michael Portillo. Pro Remain Crabb, brought up by a single mother in council housing in Wales has 30 plus nominations and is her closest contender. However, the underdog Fox, some believe, could throw up a surprise. He understands finance and defence and is a Scot — at a time when Scotland is threatening to leave the UK.

For now, Tory MPs are trying to rally together and give a message of 'one nation' and keep away the division in the party the EU Referendum caused.

On September 9, it is expected, the final two candidates will be announced when party members will vote for the new Prime Minister. Almost three months to go, anyone would say it is a long time in politics.