I do feel very sorry for Mr Shashi Tharoor. First, the good man has been forced to leave the comfort of the Taj Man Singh, an excellent five star hotel. And now he’s become a sitting duck for derision and ridicule... 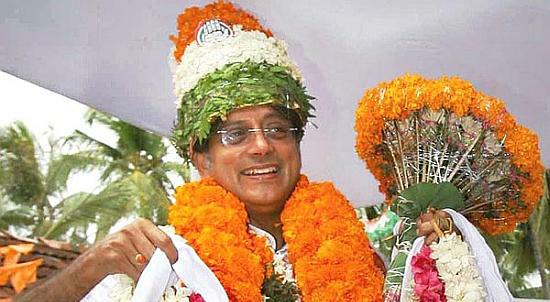 I do feel very sorry for Mr Shashi Tharoor. First, the good man has been forced to leave the comfort of the Taj Man Singh, an excellent five star hotel. And now he’s become a sitting duck for derision and ridicule as some one who stays in the lap of luxury and spends hours ‘twittering’. A friend with a bad sense of humour actually sent me an SMS that read:

I am told Twitter is an excellent service and millions of sensible people use it. True, the name does not suggest gravitas but clearly twits are not the only people who use Twitter. Indeed it turns out that Murli Manohar Joshi is on face-book, so shouldn’t we expect some-one like Tharoor to be more in step with the latest -- in this case, Twitter?

And there is no doubt that Tharoor is a brilliant diplomat and writer who wrote a book called The Great Indian Novel inspired by the Mahabharata. A man who contemplates such elevated things should be allowed all the creature comforts possible. Isn’t there an ancient Indian philosophical concept about expensive living and high thinking? Or was it simple living and high thinking? I’m sure Mr Tharoor would know from his extensive understanding of ancient texts.

There’s another reason we must not condemn Mr Tharoor to living in the Kerala Bhavan. First, he may have lost the election to become the secretary general of the United Nations, but he did have an illustrious career in that organization. And let’s accept it—if we want a man of his calibre than we must pamper him. And the UN is famous for its expensive, all expenses paid junkets in five star hotels.

Let me digress into my own experience when I was invited to a UN-backed event to discuss the “clash of civilizations” between Islam and the West last year. It was an excellent discussion in an exotic resort abroad and ever since I have been holding my breath for another invite to a meaningful debate on UN money. I never ate so much sushi and sashimi on anyone else’s expense before. And the gymnasium at that hotel was to die for! The entire experience completely converted me to the importance of five-star hotels to any civilized discourse.

Mr Tharoor already knew that. And this time round the poor man was being almost noble in not getting anyone to pay his hotel bills since the UN can no longer pick up the tab. As a minister many interested parties would have been happy to pay his bills but as a man who understands the importance of probity and ethics in public life, Mr Tharoor has declared that he was paying himself.

Indeed a colleague with a good grasp of foreign policy matters has told me that Tharoor was actually performing a public service on his own expense. His entire hotel stay was a recce for shifting the external publicity wing of the ministry of external affairs out of Shastri Bhawan into the Taj Mahal hotel. Tharoor had noticed that the corridors of Shastri Bhawan often smelt like a urinal. And he had the go ahead of his senior minister S.M. Krishna in examining the feasibility of shifting the ministry there, including the section housed in the relatively less smelly South Block. It is because Tharoor gave glowing reports about the gym facilities in his hotel that Krishna stayed at another five star property just to make sure that he was not being misled by his junior.

Now because of all this nonsense about austerity these good men have been forced to abruptly end their hotel stays. I am of the firm opinion that the government must expedite the renovations in the bungalows the two ministers intend to occupy and equip them with every possible comfort. At the very least the state must build a private gymnasium for Mr Tharoor and throw in a jacuzzi and a steam/ sauna just to make sure he can continue to give the Indian people his very best.