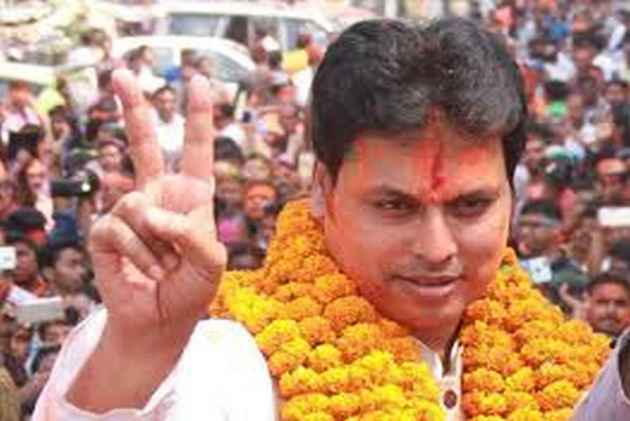 Twitteratis have slammed Tripura chief minister Biplab Kumar Deb over his remarks questioning the rationale behind crowning Diana Hayden "Miss World" 21 years ago even as he praised Aishwarya Rai for the same award, saying she "truly represents the Indian women".

Diana Hayden not an Indian beauty, Aishwarya Rai is: Tripura CM Biplab Deb being a) stupid, b) sexist and c) communal at the same time. https://t.co/Mi9TrFsoIn via @htTweets

"If biplab deb didn't exist, a comic writer would have invented him," columnist Salil Tripathi tweeted.

If biplab deb didn’t exist, a comic writer would have invented him. https://t.co/VKyXqm3BAv

Delhi CM advisor Nagendar Sharma in a tweet said, "Though we are still in April, this most likely could qualify for the most ridiculous quote of 2018."

Though we are still in April, this most likely could qualify for the most ridiculous quote of 2018 :https://t.co/BusVAaub0V via @htTweets

A senior journalist tweeted, "One reason for which I should cheer the verdict in Tripura is that the nation found a new entertainer."

Deb's comments came days after Prime Minister Narendra Modi cautioned the BJP leaders to steer clear of controversies and not offer "masala" to the media by making irresponsible statements.

The Tripura chief minister also claimed that the international beauty contests were a "farce" as the results were all predetermined.

"Whoever contested the international beauty pageants won. For five consecutive years, we won the Miss World/Miss Universe awards. Diana Hayden won it too. Do you think she should have won the title?" Deb said.

He said he failed to understand the "process of judgement" of the crowning of the Miss World contest in 1997, in which Diana Hayden had got the award.

"We see women as goddess Laxmi, Saraswati. Aishwarya Rai represents the Indian women. She became the Miss World and that's all right. But I do not understand the beauty of Diana Hayden," Deb, who became the chief minister last month, said.

"Why are there no more beauty pageant winners from India? They (the jury) have captured the market in the country and have gone elsewhere," he claimed.

Earlier this month, Deb had claimed that Internet and satellite communication existed in the days of Mahabharata.