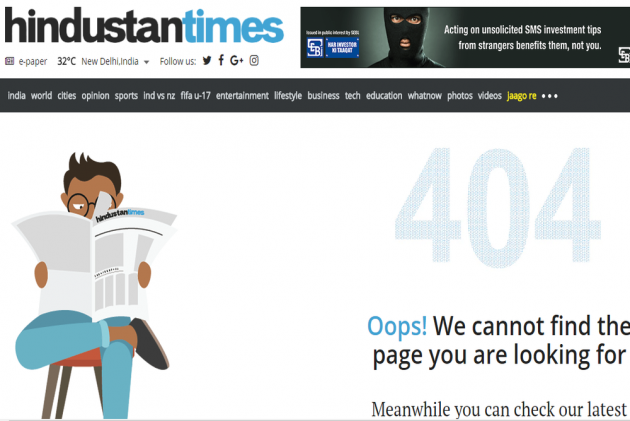 Hindustan Times pulled down its much-controversial yet popular ‘Hate Tracker’ campaign from its website on Wednesday.
The move comes two days after the newspaper’s new editor-in-chief Sukumar Ranganathan took charge.
Hate tracker is said to have been one of the main reasons along with anti-troll campaign for the exit of editor-in-chief Bobby Ghosh.
HT is yet to officially confirm the pull down and the reason for it.
The hate tracker campaign -- a crowdsourced national database on crimes in the name of religion, caste and race since September 2015 -- was launched on July 28. http://www.hindustantimes.com/hate-tracker
While launching the webpage, HT had said: “The figures and descriptions of the list on this page are drawn from news stories in the English-language press and reports from civil society organizations. But these sources are not adequate on their own….We’re asking you, our reader, to send us pieces you spot in news, to share your own stories, and to give us more details of cases we’ve already listed. To make our database comprehensive, and to understand the scope of hate, we need your help.”
In no time, it had received a massive response from across the country. Many readers of the newspaper started putting the campaign logo as their Facebook and Twitter profile pictures.
According to Newslaundry, on September 13, two days after Ghosh's resignation was announced, the HT content engagement editor, Geetika Rustagi, wrote to editorial heads in Delhi and Mumbai. "Rajesh's (Mahapatra) instruction: Kindly don't RT any hate tracker related tweets till further notice," she wrote in the mail.