Narendra Modi completes his first two years as prime minister of India. Looking at popularity, we should admit that Modi's term has so far been a success. 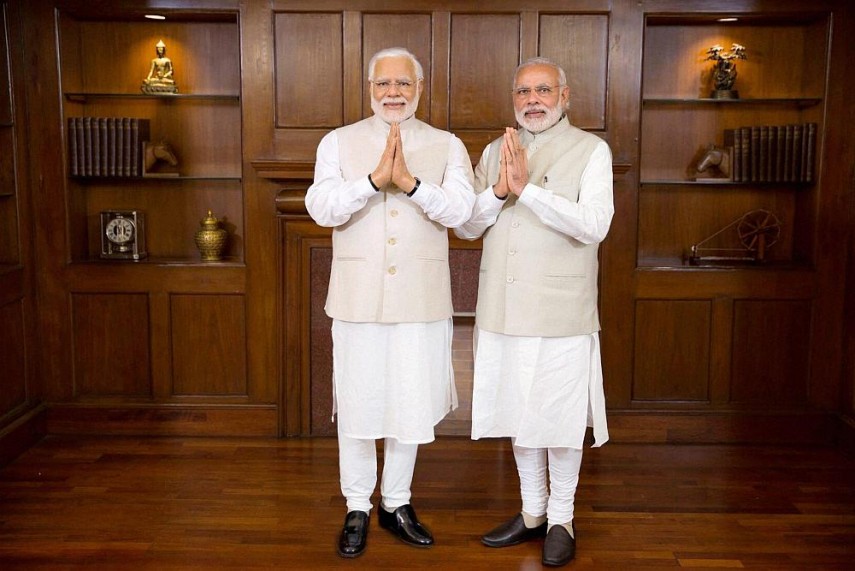 Let's have a look at how he has performed. He won the general election impressively, on the strength of his personality and his record. So let us start there.

Political record: Modi is and remains our most popular politician by far. The aura he had two years ago, he retains. Every opinion poll in the last years has shown his popularity at around 70 per cent. This is what Americans call approval rating, and 70 per cent is an incredibly high number. Particularly because opinion polling in India has become accurate in the last decade so this number is believable. Modi may be assisted by the fact that his rival Rahul Gandhi is not charismatic or competent, and that regional leaders like Nitish Kumar and Arvind Kejriwal do not have a large enough stage to project their talents. But even with this admission, it must be accepted that Modi has a credibility with Indians as nobody else has. The Bharatiya Janata Party lost state elections in Delhi and Bihar but its march towards dominance and the Congress's march towards irrelevance continues under Modi.

Economy: I was in conversation with former Finance Minister P Chidambaram a few days ago, at an event to launch his book on his time in Opposition. I asked him whether his analysis on Modi's economic policies was not overly harsh. Even if the data on exports and manufacturing and companies' profitability was grim, as he has been writing it is, surely two years is too little a span of time to judge Modi on economic performance? That is what I asked. No, Chidambaram said, it is 40% of the term. It is fair to say that here the government has promised more than it has delivered. The breakout phase into double-digit growth, more jobs, an escape from 'socialist' schemes like NREGA and Aadhar that Modi promised has not come. Indeed, he has embraced some of the policies he promised to end. I still believe that though the numbers indicate otherwise, Modi must be given time, at least another year if not 18 months, to show whether he has made a difference economically.

Corruption: This was one of the items on which the 2014 election was fought. It is said that Modi has either ended big ticket corruption in the Central government or news of it has not yet come out. As in Gujarat, he has been personally involved in this issue. I have known businessmen in Gujarat who have had to face corruption demands from those lower down, because it is impossible for one individual, however well-meaning, to change centuries of a culture. However, just as in Gujarat, I know Modi regularly calls people to ask if they are facing a problem from his ministers and bureaucrats, and he asks them to inform him if they are. He is active and well-meaning.

Legislation and governance: The role of a Central govenrnment is primarily to make new law. Governance, in the way we understand the word, meaning controlling the structure of the state, is secondary. I say this because any Union government governs India through a few hundred IAS officers. Given the smallness of the apparatus, it is not possible for there to be much difference in the governance performance of one party over another. On legislation, it is not easy to name successes because a theme is missing. If we look at the Manmohan Singh government's legislative focus, we can identity the following: Right to Information, Right to Food, Aadhar, Direct Benefits Transfer, Right to Education, Right to Work and so on. There is a clear narrative here: these laws are aimed at the poor. Modi's record lacks such focus. Perhaps this will emerge in time, but for now it does not exist. Make in India and Swachh Bharat Abhiyan are not legislative initiatives but slogans.

Foreign policy: It is strange that here there is a wide difference between the perception of amateurs and experts. Those who have been attracted to the spectacle of Modi's first year have been impressed. The prime minister held many glittering events in foreign capitals where thousands of Indians gathered to cheer him. This was seen as a foreign policy success, though it was not. The truth, and experts admit it, is that Modi's highly personalised diplomacy has been a failure. On Pakistan we have no policy that anyone can explain coherently. Modi's record has been to talk, not-talk, embrace, sulk, fire back, blame, invite over, set conditions, remove conditions randomly. I hope he changes this because it shows India's foreign policy as not being serious. On China also, Modi's hope that his charm would be the magic ingredient turned out to be naive.

Overall: If we return to the first point, popularity, we should admit that Modi's term has so far been a success. Electoral popularity is the only currency of success in democracies. It doesn't really matter ultimately what individual commentators say or write about Modi. So long as he continues the BJP's march towards greater vote share, a bigger geographic spread and a crushing of the Congress, he is a success.