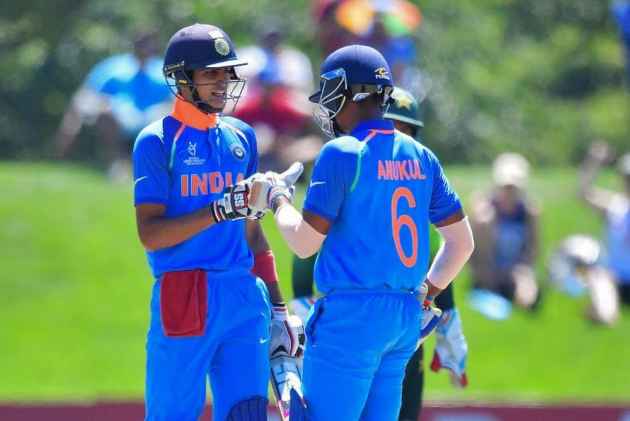 India today entered into the ICC U-19 World Cup final after beating Pakistan by 203 runs.

Shubman Gill's unbeaten 102 runs helped India score 272/9 after opting to bat and later Ishan Porel’s 4/17  crushed Pakistan. Pakistan  were bundled out for 69, their lowest total in ICC U19 CWC history.

India had set a target of 273 runs for Pakistan in the second U-19 World Cup semi-final match, being played at Christchurch's Hagley Oval cricket ground.

This is India's biggest win against Pakistan at the age group level as the gulf in standard was way too visible. India have won the tournament in 2000 (under Mohammed Kaif), 2008 (Virat Kohli), 2012 (Unmukt Chand) while losing two finals in 2006 (Cheteshwar Pujara) and 2016 (Ishan Kishan).

India's Shubman Gill stood out amongst the batters and scored 102 runs in 94 balls, taking the team's score to well past 250.

"It was an outstanding performance from the bowlers as well as the batsmen. I am very satisfied with the performance. I am expecting an exciting contest against Australia in the final. I would also like to thank the crowd for their support," skipper Prithvi Shaw said after the match.

The concerns whether multi crore IPL deals will be a distraction proved to be unfounded as 'Boys in Blue' followed their guru Rahul Dravid's instructions to the 'T' -- that World Cup semifinals is once in a lifetime opportunity while auctions happen every year.

Dravid's boys will now take on Australia in the summit clash on February 3 in what will be a repeat of the 2012 edition which India won in Australia.

Under Dravid, the team has now reached back-to-back U-19 World Cup final.

India literally outclassed their bitter rivals as it turned out to be a no-contest in the end.

Batting first, openers Prithvi Shaw (41 from 42 balls) and Manjot Kalra (47 from 70 balls) again laid the foundation with 89-run opening stand during which the skipper was the aggressor and Kalra the anchor.

But both were out in quick succession after which Gill took over to flay the Pakistani bowling attack with stylish strokeplay.

With the pitch on the slower side, Gill got enough time to play the pull shot both in front and square of the wicket off pacers Arshad Iqbal, Shaheen Afridi and Musa Khan. There were flowing on-drives, the cheeky ramp shot as he worked on the extra bounce.

"I rate this innings very highly as it was against Pakistan. The pitch was on the slower side and it was not easy for strokeplay. I am happy to have got the Man of the Match award," Gill said after the match.

Having bagged a Rs 1.8 crore deal from Kolkata Knight Riders, Gill was asked about his preferred format.

"I would like to play all three formats as adaptability is the key," said the player from Firozpur in Punjab.

While defending the total, it was a walk in the park for the Indians as the Pakistanis once again found Shivam Mavi (4 -3-6-0) and Kamlesh Nagarkoti's (5-1-7-0) pace too hot to handle.

The pressure created by then enabled Porel to get four quick wickets with skipper Shaw taking a couple of brilliant catches at gully.

Once Pakistan were 28 for 4, the Indian slow bowlers came into the act with left-arm spinner Shiva Singh (2/20 in 8 overs) and off-break bowler Riyan Das (2/6 in 4 overs) blowing away the opposition lower order to win the match in no time.

eat came in their opening match against Afghanistan.

(With agency and ICC input)