Britain and the EU are locked in an escalating diplomatic feud over Northern Ireland, the only part of the U.K. that borders the 27-nation bloc. 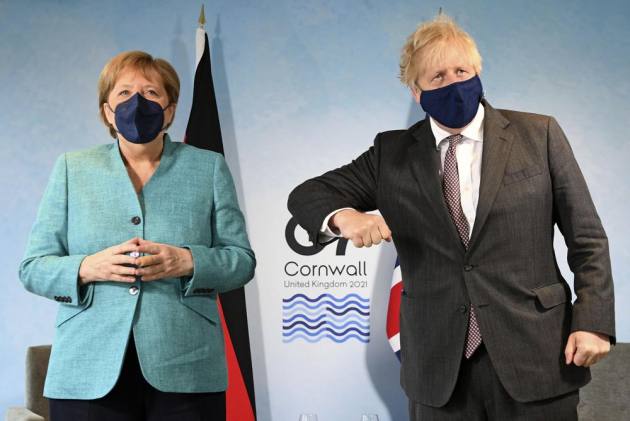 Turbulence from the divorce between the UK and the European Union provided an unwanted distraction at the Group of Seven summit taking place in southwest England, with British Prime Minister Boris Johnson saying Saturday that post-Brexit agreements will fail if the EU continues to take a “theologically draconian” approach to the rules.

Johnson held meetings with German Chancellor Angela Merkel, French President Emmanuel Macron, and the bloc's top officials on the sidelines of the summit he is hosting. Afterward, the prime minister claimed the EU was not taking a “sensible or pragmatic” approach to post-Brexit arrangements, and he threatened to use an emergency clause to suspend agreed-upon rules if the bloc did not compromise.

Britain and the EU are locked in an escalating diplomatic feud over Northern Ireland, the only part of the U.K. that borders the 27-nation bloc. The EU is angry over the British government's delay in implementing new checks on some goods coming into Northern Ireland from the rest of the U.K., while Britain says the checks are imposing a big burden on businesses and destabilising Northern Ireland's hard-won peace.

U.S. President Joe Biden has gotten drawn into the spat, raising concerns about the potential threat to Northern Ireland's peace accord.

The new arrangements, designed to keep an open border between Ireland and its northern neighbour, have angered Northern Ireland's British unionists, who say they weaken ties with the rest of the U.K. Tensions over the new trade rules were a contributing factor to a week of street violence in April, largely in unionist areas of Northern Ireland, that saw youths pelt police with bricks, fireworks and firebombs.

“We want the best possible relations with the UK. Both sides must implement what we agreed on. There is complete EU unity on this,” she said.

Johnson told Sky News at the summit site in Carbis Bay, Cornwall, that “the treaty we signed, I signed, is perfectly reasonable,” but he added: “I don't think that the interpretation or application of the protocol (by the EU) is sensible or pragmatic.”

The EU says Britain must fully implement the agreement, known as the Northern Ireland Protocol, that the two sides agreed and ratified. It is threatening legal action if the U.K. does not fully bring in the checks, which include a ban on chilled meats such as sausages from England, Scotland, and Wales going to Northern Ireland from next month.

Britain accuses the bloc of taking a rigid approach to the rules and urged it to be more flexible in order to avoid what has been dubbed a “sausage war.” U.K. Foreign Secretary Dominic Raab said Saturday that if the EU took a “bloody-minded and purist” approach, Britain would have to act to protect the U.K.'s internal market and ensure that British-produced goods can be sold in every part of the country.

Merkel said she made clear to Johnson at their meeting that nothing could change on the fundamentals of the agreement. But she hinted at compromise, saying that “when it comes to practical questions...one should consider where things can be done better so it helps the citizens of Northern Ireland.”

Johnson said some European leaders seemed not to understand “that the U.K. is a single country, a single territory. I just need to get that into their heads.”

“If the protocol continues to be applied in this way, then we will obviously not hesitate to invoke Article 16,” the British leader said, referring to an emergency brake allowing either side to suspend parts of their agreement. It is intended for use only in extreme situations, but the EU briefly threatened to invoke it in January amid a coronavirus vaccine spat, to stop doses from Ireland crossing the border.

Speaking to Channel 5, Johnson said, “I certainly think that the protocol is capable of being used and interpreted…in a pragmatic way or a theologically draconian way.

“At the moment we are seeing...a lot of unnecessary difficulties,” he said.

Despite the tough talk, Johnson said he was optimistic of reaching a compromise, though British officials say it's unlikely the issue will be solved during the G-7 summit, which ends Sunday.