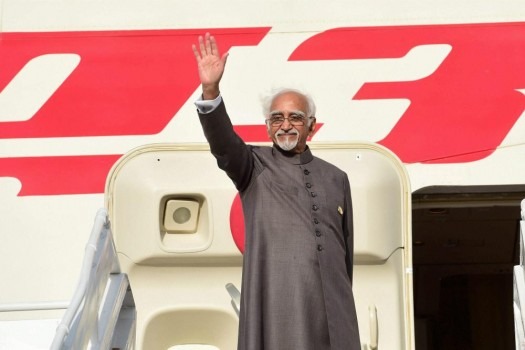 Outgoing Vice President Hamid Ansari who feels there is a sense of unease and insecurity among the Muslims in the country today,  has shared his concerns with Prime minister Modi.

While talking to Karan Thapar on Rajya Sabha TV,  Ansari said he had raised his concerns regarding the situation with the Prime Minister as well.

"Have you ever shared your concerns, your apprehensions with the Prime Minister or with the government?"  asked Thapar.

"Yes...Yes. But what passes between the Vice President and the Prime Minister in the nature of things must remain in the domain of privileged conversation," the Rajya Sabha Chairman said.

He also said that he has flagged the issue with other union ministers too.

Ansari, whose second five-year term as the Vice-President ends tomorrow, made these remarks in the backdrop of incidents of intolerance and cow vigilantism and comments made by some saffron leaders regarding the minority community.

Stating that he had flagged the issue of intolerance with Prime Minister Narendra Modi and his cabinet colleagues, Ansari, 80, also described as a "disturbing thought" that Indianness of citizens was being questioned.

In the interview, Ansari referred to incidents of lynching and 'ghar wapsi' and killings of rationalists as a "breakdown of Indian values, breakdown of the ability of the authorities at different levels in different places to be able to enforce what should be normal law enforcing work and over all the very fact that Indianness of any citizen being questioned is a disturbing thought."

"Yes it is a correct assessment," Ansari said when asked whether he agreed with the assessment that the muslim community is apprehensive and that it was feeling insecure as a result of the kind of comments made against them.

"Yes it is a correct assessment, from all I hear from different quarters, the country; I heard the same thing in Bangalore, I have heard from other parts of the country, I hear more about in north India, there is a feeling of unease, a sense of insecurity is creeping in," he said.

Asked whether he felt that the muslims are beginning to feel they are not wanted, Ansari said, "I would not go that far, there is a sense of insecurity."

He said India is a plural society that for centuries, not for seventy years, has lived in a certain "ambience of acceptance" which is now under threat.

He was of the view that the propensity to be able to assert your nationalism day in and day out is "unnecessary".

Ansari was of the view that while tolerance is a good virtue, it is not a sufficient virtue. "...Therefore you have to take the next step and go from tolerance to acceptance," he said.

At an event in Bengaluru on Sunday, Ansari said the "version of nationalism" that places cultural commitments at its core promotes intolerance and arrogant patriotism.

Responding to a question on comments made by some BJP leaders related to minorities, he said he would not talk about political people or political parties.

"But to me, every time such a comment appeared or came to my knowledge; I mean my first reaction was that, A: the person is ignorant, B: that he is prejudiced and C: he does not fit into the framework that India has always prided to itself on, which is to be accommodative society," he said.

Responding to questions on triple talaq, Ansari said it is a social aberration, not a religious requirement.

"Firstly, it is a social aberration, it is not a religious requirement. The religious requirement is crystal clear, emphatic, there are no two views about it but patriarchy, social customs has all crept into it to create a situation which is highly undesirable," he said.

He said the courts do not have to step in as the reform has to come from within the community.

"The courts can say that we don't recognise it. That's all. I mean a marriage has to be recognised on certain occasions by the system of the state. And if a state functionary at a particular point of time refuses to recognise a happening which may be the product of a triple talaq, that’s it," he explained.

To a poser on the situation in Jammu and Kashmir, the former diplomat said, "the problem has always been primarily a political problem. And it has to be addressed politically."

He agreed to a suggestion that politicians are ducking the problem.

"That’s my impression. And I’m not the only one in the country...When young boys and girls come out on to the streets and throw stones day after day, week after week, month after month, it's something to worry about because they are our children, they are our citizens.

"Something is obviously going wrong. What exactly, I am not the final word on it, but I think there are enough people in the country who are worried about it. Eminent people belonging to different political persuasions and their worry must be taken on board," the Vice President said.