Rahul Gandhi met the two leaders separately thrice since Thursday and is learnt to have decided the chief ministerial face in the state. 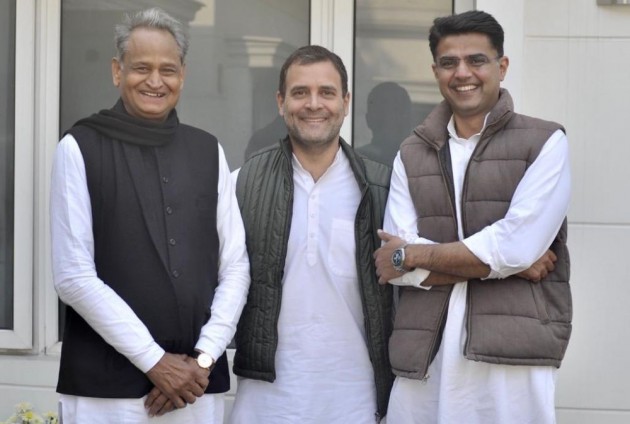 Congress president Rahul Gandhi on Friday appeared to have successfully brokered peace between Ashok Gehlot and Sachin Pilot after several rounds of discussions and tweeted a picture of the two warring leaders from Rajasthan with himself.

"The united colours of Rajasthan," he said in the tweet along with the photograph in which the three leaders were seen in a jovial mood.

The united colours of Rajasthan! pic.twitter.com/D1mjKaaBsa

Gandhi met the two leaders separately thrice since Thursday and is learnt to have decided the chief ministerial face in the state. But there was no immediate clarity on who would be the chief minister and it is likely to be announced by this evening.

BJP Is Going To Lose All Assembly Elections, So Talking Of Ram Mandir: Sachin Pilot

There have been hectic discussions between top party leaders, including Sonia Gandhi and Priyanka Gandhi Vadra, on the selection of chief ministers for Rajasthan and Madhya Pradesh.

The meeting came hours after the leadership issue was settled in Madhya Pradesh, with Gandhi tweeting his picture with Kamal Nath and Scindia, who were both chief ministerial aspirants. The smiling picture carried the line "The two most powerful warriors are patience and time - Leo Tolstoy."

Kamal Nath was chosen as the new Chief Minister of Madhya Pradesh and both he and Scindia flew down to Bhopal to announce the decision.