United In Grief But Divided Later? Karunanidhi's Demise May Usher In A Political Flux In DMK And Tamil Nadu

Karunanidhi was a famed orator and screenplay writer who built his party on the back of a Dravida upsurge and linguistic Tamil pride. 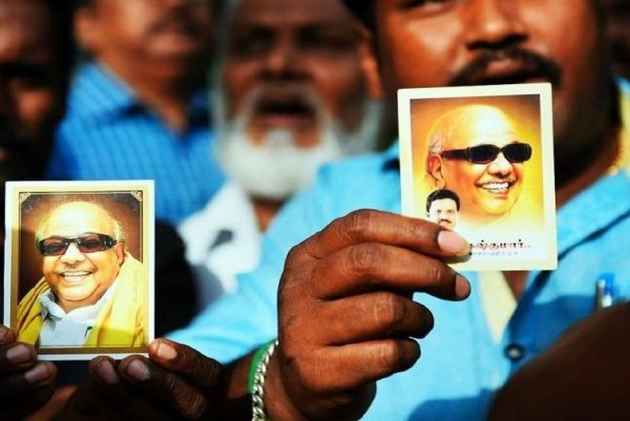 If you want an idea of what might happen to the Dravida Munnetra Kazhagam (DMK) or indeed, politics in Tamil Nadu after the demise of DMK leader Muthuvel Karunanidhi this week, a hard look at Maharashtra might help. There are striking resemblances between the DMK and the Shiv Sena, the demise of whose supremo,  Bal Thackeray, changed the course of Maharashtra's politics.

Karunanidhi was a famed orator and screenplay writer who built his party on the back of a Dravida upsurge and linguistic Tamil pride. Thackeray was an equally spirited orator and cartoonist who built his party on the back of Maratha pride and Marathi affinities. Though Thackeray leaned to the right and aligned with the BJP, Karunanidhi's politics with its roots in the Dravida movement has found its own shades. However, in the land of the Mahabharata, an epic centred around warring cousins and family can be more potent than ideological or historical connections. That might well be the case in Tamil Nadu now.

READ ALSO: 'One Who Worked Without Rest, Will Rest Now', Reads Karunanidhi's Epitaph

While the cadres of the DMK and its allies, friends and even rivals and opponents line up to pay homage to Karunanidhi's mortal remains in Chennai, the cohesion in the party's ranks may come into question over time, even though Karunanidhi's heir and son M.K. Stalin is firmly in the driver's seat as of now. It would be, however, a challenge for him to steer the party in a state very different from the one where his father mixed cinema scripts and grassroots campaigns to inherit the Dravida party's mantle from his mentor C.N. Annadurai.

Just as Uddhav, Bal Thackeray's son and official scion, and Raj Thackeray, his cousin, became rivals following the formation of the Maharashtra Navnirman Sena (MNS) that challenged the Shiv Sena's core constituency (even when the elder Thackeray was alive), Stalin's relationship with his cousins, Kalanidhi and Dayanidhi Maran, will be closely watched. The Maran brothers are sons of the late Murasoli Maran, Karunanidhi's nephew. Stalin's elder brother M.K. Alagiri has a clearcut political rivalry with the official heir, but he has not been a major political force. The Marans may be another kettle of fish.

A political fire in the DMK's top echelons was quickly doused in 2006 but pointed to simmering political rivalries. Dinakaran, the newspaper run by Kalanidhi Maran, ran into a controversy when it published the results of opinion polls that showed Stalin having more approval than Alagiri but also listed "others" that might include the Maran brothers and sister Kanimozhi. Incidents of violence in Madurai, Alagiri's base, showed fissures in the party. The events led to the exit of Dayanidhi Maran from the UPA cabinet led by Prime Minister Manmohan Singh and his replacement by A. Raja in 2007.

Tamil Nadu now has two sets of television channels owned by the DMK cousins -- one led by Sun TV whose reins are with Kalanidhi and the other led by Kalaignar TV aligned to the Karunanidhi family.  Kalanithi is more of a business tycoon now but may become a mover and shaker in a state where show business, media and politics are closely aligned.

All this would be compounded by the fact that unlike in Maharashtra, where three shades of pan-Indian nationalism are at play thanks to the BJP, the Congress and the Sharad Pawar-led Nationalist Congress Party, in Tamil Nadu, backward castes are somewhat evenly split between the AIADMK and the DMK, both of whom have lost their supremos over the past two years, leaving a giant power vacuum in a state driven by personality cults. We need to watch out for a "realignment of Dravida political forces" -- a twist of what former prime minister V.P. Singh once described as "realignment of centrist political forces" in his days of coalition making.

The Dravida movement has already spawned several factional parties based on caste, region or personalities, including the Pattali Makkal Katchi (PMK), the Vaiko-led MDMK and Dalit groups such as the Viduthalai Chiruthai Katchi (VCK). The AIADMK already has three groups following the death of J. Jayalalitha and the dominant one currently in seat at Fort St George may be more an alliance for sharing the spoils of power while it lasts than one that spells long-term cohesion. As the next round of elections near, we may well see defections, splits or other forms of political realignments between components of the kazhagams.

The BJP is looking for its own foothold in the state, and that brings in its own dynamics. Movie stars including Kamal Haasan and Rajnikanth have already taken baby steps into state politics.  A young generation of Tamilians is shaping a new political culture in an industrialised post-IT, urbanised and globalised Tamil Nadu. WhatsApp memes and YouTube videos are now part of Tamil Nadu's socio-political mainstream -- a far cry from the days of street plays and black-and-white cinema scripts that brought the DMK to power. The fluidity in all this is undeniable.

(The author is a senior journalist who has worked for Reuters, Hindustan Times and The Economic Times. He tweets as @madversity. Views expressed are his own.)