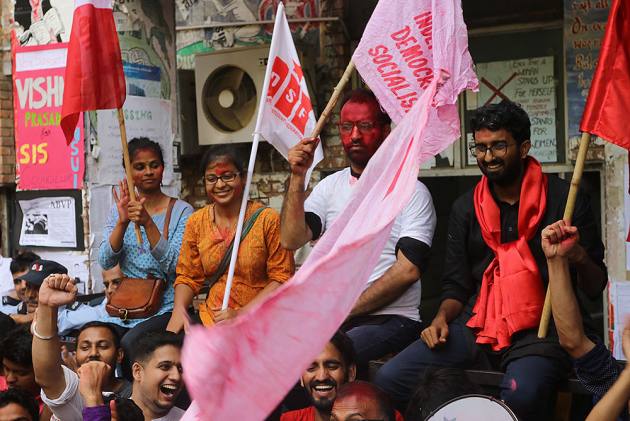 First Person: What A Student Expects From JNU Election

Left's Ajaz Ahmad Rather was elected as the General Secretary with 2423 votes against ABVP's Ganesh Gurjar (1123 votes).

Amutha Jayadeep was elected as the Joint Secretary with 2047 votes against ABVP's Venkat Choubey (1290 votes).

The election was held on Friday, September 14 and witnessed around 67.8 per cent voting, slightly higher than the usual voter turnout.

The election took a dramatic turn when counting was suspended on Saturday around 4 am after members of the ABVP staged protest outside the counting centre, alleging that the organization was not informed about the start of the counting process.

This led to ruckus on campus and a slew of allegations and counter allegations of violence and vandalism from the right and left-wing groups.

The counting was, however, resumed at around 6:30 pm on Saturday after two teachers from the Grievance Redressal Cell were appointed as observers for the counting process.

Even as the voting was underway on Sunday afternoon, ABVP presidential candidate Lalit Pandey continued to accuse the election committee of partisanship.

The Congress affiliated NSUI fared poorly on all seats of the central panel. Its presidential candidate, whose candidature was initially rejected by the university and later restored after Delhi High court stayed the varsity’s order, received only 402 votes.

Similarly, its candidates for the posts of vice-president, general secretary, and joint secretary received 457, 328 and 772 votes respectively.

For the left-wing groups, the core issues of the election centred around seat cuts, alleged high-handedness of the university’s administration and reservations for students. The Left candidates also regularly attacked the central government, BJP and RSS for bringing rule of “mobocracy” in the country and turning the nation into “lynchistan”

The ABVP alleged hypocrisy in the United Left Panel, accusing the panel of being “opportunists”, who came together for the sake of “grabbing power” even as they have a history of fighting elections against each other, besides sharp ideological differences.

The JNU campus has been the nerve centre of many controversies since past few years, dominating national news and political narratives more than once. However, the campus has a history of activism and student politics and has produced a number of leaders who succeeded in national politics as well.