The order was passed on the recommendation of Governor Ram Naik. 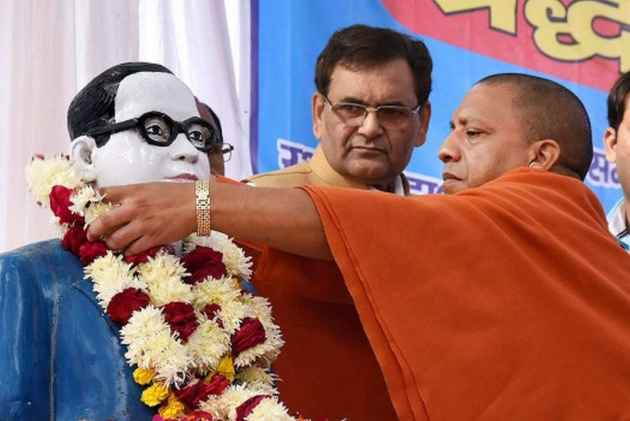 The Yogi Adityanath government in Uttar Pradesh today waded into a political controversy by deciding to introduce 'Ramji' as the middle name of the Father of the Constitution B R Ambedkar in all official correspondence and records.

The decision did not go down well with the opposition ahead of the 2019 Lok Sabha polls, with a fuming Samajwadi Party seeing vote-bank politics behind the move.

A government order to this effect, issued last night, got mired in political controversy with the SP crying hoarse that the move smacked of politics ahead of the Lok Sabha elections.

"The BJP government is playing politics with the name of the Dalit icon," SP leader Anurag Bhadoria said, hours after the state government issued the order.

He charged the state government with politicising Ambedkar's name to attract Dalit votes.

In Mainpuri, SP chief Akhilesh Yadav said instead of altering Ambedkar's name, it is important that the path he showed is followed.

"A change has been made in the name of Bhim Rao Ambedkar ... Whosoever has the right to vote knows his name... It is essential today, when he is being remembered and a new name is being affixed with his name, to follow the path shown by him," he said, adding every child knows Ambedkar's name.

"I will say that it is also essential that the chief minister reads the Preamble of the Constitution... If he does so, the anger that was shown in the UP Legislative Council over his remarks against socialism will not be seen... The Constitution and its basis is around socialism," he said, referring to Adityanath's speech in the Vidhan Parishad yesterday.

"If someone says 'sabka saath sabka vikas' it can also be considered as the definition of socialism by some people," he stressed.

Seeking to blunt the opposition attack, UP cabinet minister Swami Prasad Maurya said there was no politics in the decision and no ulterior motive should be seen in the order issued by Principal Secretary (Admin) Jitendra Kumar, an official spokesman said here today.

Another senior minister and spokesman of the Uttar Pradesh government, Sidharth Nath Singh, said the BJP has only seen to it that the name of Baba Saheb is written correctly.

"Those who follow his ideals and indulge in tactics should not dabble in politics on his name... When it is being written and used rightly they should praise it... This is our appeal to them," he said.

"In Maharashtra, a father's name is mentioned in the middle of his son's name. But, if they (opposition) sees Ayodhya in it, this shows how hollow they are and how low they have stooped to that they connect everything with it (Ram and Ayodhya)," he said.

"We are happy that we have rectified the name and that from April use of Baba Saheb's photo in all government offices has been made mandatory... Every worker and leader of the BJP considers Baba Saheb as an ideal personality and does not respect him just for vote bank," Singh said.

To a question, he said: "The SP should first answer why they had not done the needful when Governor Ram Naik had made this suggestion to him... Akhilesh Yadav should say...Now he has joined hands with Mayawati."

The campaign to write Ambedkar's name correctly was initiated by Governor Ram Naik in December 2017, citing the manner in which Ambedkar signed on the pages of the Constitution.

The spelling of Ambedkar in English will remain unchanged, but in Hindi it will be spelt as 'Aambedkar'.

The governor had written to the prime minister, the chief minister and also to Babasahib Dr Bhimrao Ambedkar Mahasabha, expressing concerns over the prevalent "incorrect spelling" of Ambedkar.

'Ramji' was the name of the father of B R Ambedkar and as per practice in Maharashtra, father's name is used as the middle name by his son.