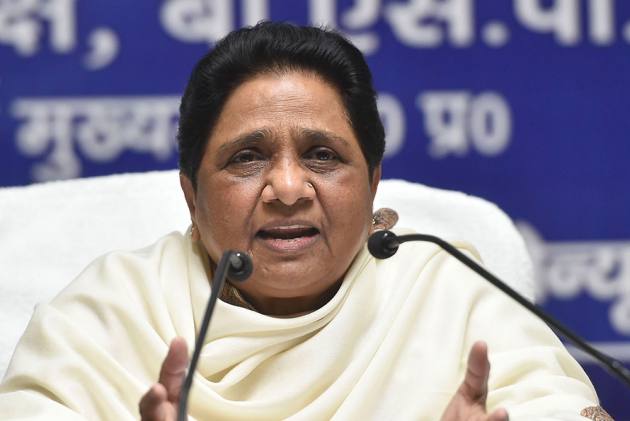 Bahujan Samaj Party (BSP) president Mayawati on Monday said her party will win "absolute majority" in the 2022 Uttar Pradesh polls, even as she slammed those who oppose the humanitarian approach of Babasaheb Bhimrao Ambedkar while showing "false respect" for him.

Speaking to reporters on the 65th death anniversary of Babasaheb Ambedkar, the architect of the country's Constitution, she also shared her party's plans for assembly polls in two other states. "In Uttarakhand, the BSP will contest all the seats on its own and in Punjab in alliance with the Shiromani Akali Dal," she said, exuding confidence that her party will do better in Uttarakhand and form a strong coalition government in Punjab.

Paying her tributes to BR Ambedkar, she said he suffered many hardships but dedicated his whole life to make the downtrodden and deprived sections stand on their feet. She alleged there are parties and organisations with narrow and casteist mindset and who have always opposed the humanitarian approach of Ambedkar while showing "false respect" for him.

The former Uttar Pradesh chief minister accused the BJP and other parties of not giving Dalits the full benefit of their legal rights enshrined in the Constitution. The BSP will win "absolute majority" in Uttar Pradesh and would form a government "stronger than" it had after winning clear majority in 2007. She said the only remedy for governments not running according to the Constitution is to throw them out of power. "Only then you can work according to the constitution."

"Coming on the streets will not work, changing the power will do. When there is a change of power, the Constitution will be saved. People who are opposed to Babasaheb Ambedkar’s (ideas) are in power then what will we do by taking to the streets?” she asked, When reporters asked her about the Uniform Civil Code, she retorted, “You are preparing the Central government to bring this law soon.” She also attacked the Akhilesh Yadav-led Samjwadi Party, saying, “People know that during his reign, hooliganism and mafia were at peak.”

Flaying the ruling BJP, she said that contrary to the party's claims, atrocities are reported in the state against the weaker sections everyday. She said Babasaheb Ambedkar "Gave legal rights to these classes…but due to the casteist mindset of the Central and state governments, they could not get the full benefit of these rights".

"Ambedkar had also said that if these sections of people want to take full advantage of the legal rights given in the Indian Constitution, they should have the master key of political power at the Center and in states. The biggest proof of this is the four-time BSP rule in Uttar Pradesh," she said.

"The main goal of the BSP is to keep forward Ambedkar's thought of an egalitarian society and campaign for self-respect, and this should not be underestimated. This caravan is neither going to stop nor is it going to bow down," she said.

Some organisations are engaged in weakening Ambedkar's movement for their selfishness, especially by dividing the votes of Dalits, Adivasis, backward classes and other marginalised sections, she said.