Rajbhar's party has forged an alliance with the SP for the state assembly polls slated to begin from February 10. 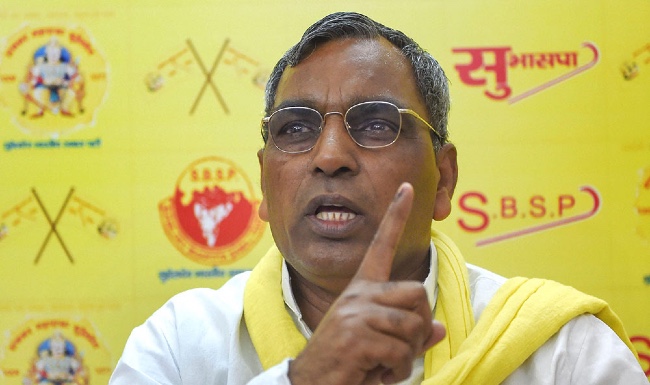 Suheldev Bharatiya Samaj Party chief Om Prakash Rajbhar on Sunday claimed that a senior BJP leader met him at his residence, whom he offered to contest on his party's ticket in the Uttar Pradesh Assembly polls if the ruling outfit denies him the chance.

He also claimed that Union Minister of State for Commerce and Industry Anupriya Patel is in touch with the opposition Samajwadi Party (SP) for the polls. Rajbhar added that several BJP ministers are in touch with SP chief Akhilesh Yadav.

Speaking to a news channel, the Suheldev Bharatiya Samaj Party (SBSP) chief said BJP ministers meet Akhilesh Yadav late in the night and then the SP chief seeks his opinion. “A BJP leader met me over a cup of tea. I asked him from where is he contesting, following which he asked me the same question. I told him that the list is yet to be finalised. He then said that he is preparing to contest from the Sarojini Nagar Assembly constituency,” Rajbhar said.

“I told him that you prepare for the elections and if the party (BJP) does not give you a ticket, then you can fight the polls on our party ticket," he said. A SBSP leader said the BJP leader in question is Dayashankar Singh, the BJP's UP vice-president. When contacted, Dayashankar Singh told PTI, "We know each other very well, and it was an informal meeting (with Rajbhar)."

At present, the Sarojini Nagar Assembly constituency is held by state minister Swati Singh, the wife of Dayashankar Singh. Meanwhile, Rajbhar also told PTI, "Union minister and president of Apna Dal (Sonelal) Anupriya Patel is in touch with the SP. Talks are on between Anupriya and the SP leadership. Now, everybody has got an idea that farewell of the BJP is definite in Uttar Pradesh."

He said how far have the talks progressed, only Akhilesh Yadav can say something about it. However, Ashish Patel, the working president of Apna Dal (Sonelal), told PTI, "For Rajbhar, it is enough to know that Apna Dal (S) is a part of the BJP-led NDA. Discussions on seat sharing with the BJP is going on, and this time, the party will contest on more seats as compared to the previous elections." In the 2017 state assembly polls, the Apna Dal (S) had contested as an ally of the BJP on 12 seats, and won nine seats.