Haryana Education Minister Kanwar Pal told the House that at present a total of 8,506 posts of different categories of teachers are sanctioned in the Mewat cadre. At present, 4,325 teachers are working in 938 government schools of Nuh district, he said. 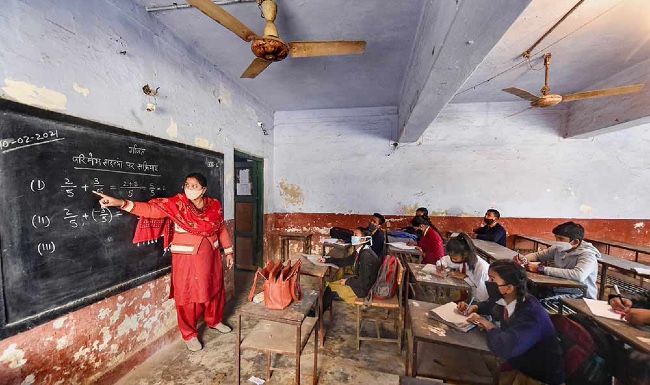 Haryana Congress MLA Aftab Ahmed on Friday slammed the BJP-led state government for not paying adequate attention to the Mewat region, saying up to 50 per cent posts of teacher are lying vacant in schools there.

During the Question Hour in the State Assembly here, the Nuh legislator said under the previous Congress regime, a Mewat cadre was created with an aim to provide quality education and ensure that adequate number of teachers are posted in schools.

“Up to 50 per cent posts of teacher are lying vacant in schools in Mewat. The seriousness of the government to tackle this is evident from the fact that many teachers have been transferred out of the district,” said Ahmed.

Kanwar Pal said since 2015, 93 principals and 91 elementary education headmasters have been appointed by promotion in the high schools of the Mewat cadre. Apart from this, a total of 619 elementary teachers have been recruited through direct recruitment, he said.

He told the House that a demand has been sent to the Haryana Staff Selection Commission for recruitment against 315 posts of PGT, 370 of TGT and 952 of PRT in the Mewat cadre. The commission has informed that the recruitment process will be completed in a period of about four to five months, the minister told the Assembly.

He said as far as filling posts of teacher of different categories reserved for promotion is concerned, the process of filling those posts has been started, which will be done soon. Replying to another question raised by BJP MLA Assem Goel, minister Anil Vij said whenever cases of sending people abroad through illegal means are reported, immediate action is taken.

An SIT was constituted last year under the chairpersonship of IPS officer Bharti Arora to tighten the noose around those involved in such cases. As many as 591 people were arrested and 485 FIRs, and an amount of Rs 81,38,800 recovered from them.

To another question raised during the Question Hour, Chief Minister Manohar Lal Khattar said a detailed plan has been prepared to deal with the problem of waterlogging in the state. A special scheme will be started by the December-end and a dedicated portal for it will be launched in January, Khattar said.