US: 11 Killed, 6 Injured In Shootout At Jewish Synagogue

A gunman opened fire at a Jewish synagogue in the US city of Pittsburgh killing at least 11 people and injuring several others. 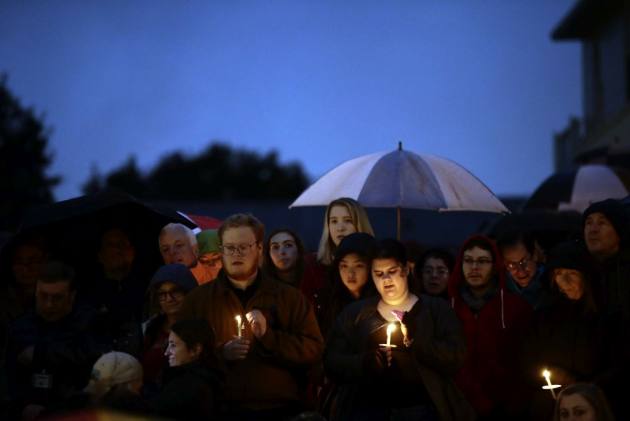 A gunman on Saturday opened fire at a Jewish synagogue in the US city of Pittsburgh, killing at least 11 people and injuring several others including four policemen, in the deadliest "anti-Semitic attack" to take place in America in years.

The shooter, Robert Bowers, 46, surrendered after he was injured during an exchange of fire with the police, according to local media reports.

At least 11 people were killed and six others were injured inside a synagogue in Pittsburgh, US state of Pennsylvania, a city official said.

No children were among the fatalities and the six injured include four police officers but do not include the suspect, Wendell Hissrich, Pittsburgh's public safety director, said at a press conference.

The initial call to 911 was made around 9.54 a.m. and officers were dispatched to the scene within a minute, Hissrich said, Xinhua reported.

The shooter, described as a white, heavy set with beard, was being questioned and treated at hospital. The FBI is investigating this as a "hate crime". Before opening fire, he reportedly yelled, "All Jews must die!"

FBI agents reached the 'Tree of Life' Congregation Synagogue at Squirrel Hill area in Pittsburgh, where a large number of people had gathered for a baby naming ceremony when the shooting took place. The motive was not immediately known.

Bowers' social media posts were reportedly rife with anti-Semitic content.Brady said that Bowers' actions "represent the worst of humanity" and criminal charges against him could be filed as early as Saturday.

The suspect was armed with what appeared to be an assault rifle and at least three handguns.

Investigators believe the gunman was acting alone but his full motive still isn't known, said Bob Jones, the special agent in charge of the FBI's office in Pittsburgh.

Jones said the scene of Saturday's shooting at the synagogue was "the most horrific crime scene" he has seen" in 22 years with the FBI.

The shooting will be prosecuted as a hate crime and the FBI will be leading the investigation, Hissrich said earlier in the day.

The synagogue is located at the intersection of Wilkins and Shady avenues. The neighbourhood of Squirrel Hill, about 10 minutes of drive from downtown Pittsburgh, is the hub of the city's Jewish community.

Between 50 and 60 worshippers would be there on an average Saturday morning, according to a spokesman for the Jewish community in Pittsburgh.

US President Donald Trump told a rally in Indianapolis, state of Indiana, on Saturday that "there must be no tolerance for anti-Semitism."

"This was an anti-Semitic act," Trump said. "This wicked act of mass murder is pure evil, hard to believe, and, frankly, something that is unimaginable."

Israeli Prime Minister Benjamin Netanyahu said, "I was heartbroken and appalled by the murderous attack on a Pittsburgh synagogue today".

According to NBC news, shooter Bowers was armed with an AR-15 style rifle in addition to multiple handguns.

In his multiple social media accounts, Bowers showed his anti-Jew sentiment in particular vented his anger against Hebrew Immigrant Aid Society or HIAS.

"HIAS likes to bring invaders to kill our people. I can't sit by and watch my people get slaughtered. Screw your optics, I am going in," he said on the social media platform Gab, an alternative version of Twitter.

In another Gab message, Bowers said he did not vote for Trump, nor did he ever wore a cap of MAGA (make America great again).

UN Secretary-General Antonio Guterres on Saturday strongly condemned the shooting at the synagogue in Pittsburgh, said his spokesman.

Guterres was shocked at the bloody shooting that killed 11 people. He expressed his deepest condolences to the families of the victims, said Stephane Dujarric, the spokesman, in a statement.

"The shooting in Pittsburgh is a painful reminder of continuing anti-Semitism. Jews across the world continue to be attacked for no other reason than their identity. Anti-Semitism is a menace to democratic values and peace, and should have no place in the 21st century," said the statement.

The US Holocaust Memorial Museum strongly condemned it and reminded all Americans of the dangers of unchecked hatred and anti-semitism which must be confronted wherever they appear and called on all Americans to actively work to promote social solidarity and respect the dignity of all individuals.

The shooting came days after recovery of a series of package bombs sent to several present and former high-ranking officials.

US President Donald Trump ordered that American flags be flown at half-staff following a shooting at a Pittsburgh synagogue that left 11 people dead.

All flags at the White House, public grounds, military posts, naval stations and ships will be flown at half-staff through October 31 as a mark of "solemn respect" for the victims, Trump ordered.