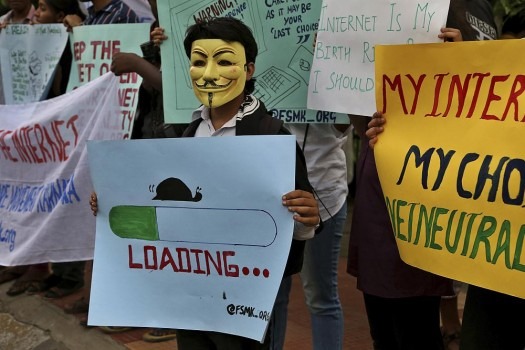 The top US telecom regulator unveiled a formal plan today to roll back the "net neutrality" rules adopted in 2015 aimed at treating all online traffic equally.

The announcement by Federal Communications chairman Ajit Pai marked the latest twist in a decade-old political dispute with both sides claiming to represent a "free and open" internet.

Pai unveiled a "Restoring Internet Freedom" order to be voted on at the FCC's December 14 meeting, scrapping a hotly contest rule which barred broadband firms from shutting out rival services or creating online "fast" and "slow" lanes.

Pai said his plan would return to a "light-touch regulatory approach" which has allowed the internet to flourish.

He said the 2015 rule had "depressed investment in building and expanding broadband networks and deterred innovation."

"Today, I have shared with my colleagues a draft order that would abandon this failed approach and return to the longstanding consensus that served consumers well for decades," Pai said in a statement.

"Under my proposal, the federal government will stop micromanaging the internet."

The dispute over net neutrality has been the subject of several court battles, with backers arguing rules are needed to guard against powerful broadband firms like Comcast and AT&T acting as "gatekeepers" which can punish rivals.

Matt Wood of the consumer group Free Press said the new initiative was a "massive giveaway to the handful of media conglomerates" which control broadband.

"The most-hated and worst-rated companies will be free to block, throttle and discriminate against your speech on the internet if Trump's FCC chairman gets his way," Wood said.

"Companies like AT&T, Comcast and Verizon will be free to censor online speech and manipulate economic activity to their favor, while taking away the educational opportunities and political-organizing tools essential to millions of people across the country."

But Jonathan Spalter, chief executive of the industry association USTelecom, welcomed the move.

"The removal of antiquated, restrictive regulations will pave the way for broadband network investment, expansion and upgrades," Spalter said in a statement.