Vajpayee Was A Man Of Conscience, Not Bound By Fetters Of His Ideology: Prahlad Kakkar

Indian ad film director Prahlad Kakkar says " When you look at Vajpayee as a statesman, and that is the word for him, he rose above politics. The only other statesman we had was Jawaharlal Nehru, strangely enough." 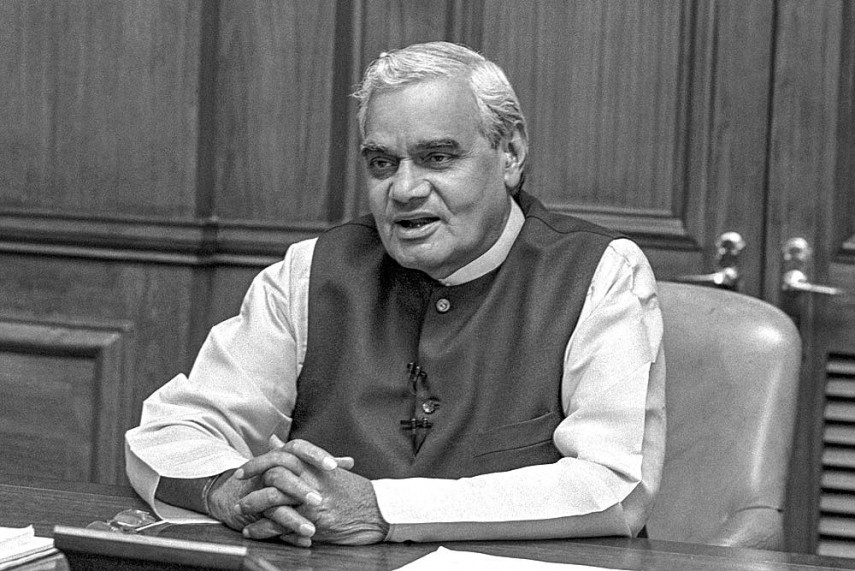 Former Prime Minister Atal Behari Vajpayee, one of India's most charismatic leaders who led the nation through several crises and held together with a tenuous coalition with his inclusive politics, died in Delhi on Thursday. He was 93.

Indian ad film director Prahlad Kakkar spoke to Outlook on BJP patriarch's demise. " When you look at Vajpayee as a statesman, and that is the word for him, he rose above politics. The only other statesman we had was Jawaharlal Nehru, strangely enough," Kakkar says.

As a politician, Atal Behari Vajpayee was quite remarkable. But his badge of honour was his statesmanship. And that just about sums up the man whose career was built on the Hindutva ideology but still managed to remain aloof from the hardline path of the Rashtriya Swayamsevak Sangh (RSS). So, when he became the Prime Minister of the multi-cultural and multi-religious country, Vajpayee realised he could not follow a particular dogma. And, in turn, the country started believing in him to a large extent because as a leader Vajpayee was a man of conscience, not bound by the fetters of his ideology. That was his greatest qualities as a pan-India leader.

Vajpayee knew he had to be the leader of the whole country and therefore he was very particular about that. He wasn’t parochial; didn’t want any community to feel alienated.  Because of his magnanimous and compassionate attitude towards everyone who lived in the country, he made sure that the hardcore Hindutva programmes did not succeed. For example, the controversial issue of the so-called saffronisation of education. Murli Manohar Joshi tried his best but could never get the support of Vajpayee’s PMO to completely change the education sector.

Vajpayee had a very educated, middle-ground air. He wasn’t frothy and fanatical. When you look at Vajpayee as a statesman, and that is the word for him, he rose above politics. The only other statesman we had was Jawaharlal Nehru, strangely enough. Though Nehru was an anglophile, completely anglicised and believed in the dogma, he wanted to bring a milder form of Communism of Marx and Engels. Vajpayee was firmly an Indian, attached to his roots, to the ethos of the country and his religion. He was extremely popular because he was not an extremist.

Vajpayee was not an economist but he knew what was good for the country. Manmohan Singh had set the ball rolling earlier when he was the finance minister under Narasimha Rao. Vajpayee didn’t derail the process of liberalisation just because Singh was from another party. He opened trade and communication with Pakistan – buses, trains etc. He also realised that the real enemy is not Pakistan but China; he knew that if Pakistan and India came together, we would become a big force. However, the BJP’s India Shining campaign failed because it was premature. There was a sense of euphoria about the economy but never translated into reality because they did not get another term.

Vajpayee was the check point between the radical and moderate Hindus. When the 2002 Gujarat riots took place, he was very upset. Before people shut him up, Vajpayee made very categorical statements on the violence which he termed “unfortunate”.

One of the questions that I had to answer once was about the difference between Vajpayee, Manmohan Singh and Narendra Modi as prime ministers. Actually,  if you strip all the hype and the posturing and idiosyncracies, they were more similar than not. End of the day, they were fierce nationalists and they did a lot for the sake of the country and not for individuals.

(As told to Prachi Pinglay Plumber)