Vardhan had yesterday claimed that Hawking, who passed away this week, said 'on record' that our Vedas might have a theory which is superior to the Einstein's theory of e=mc^2. 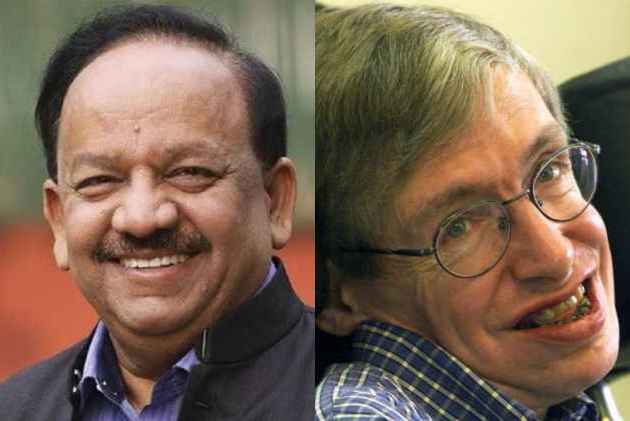 Malcolm Perry, a founding trustee of the Stephen Hawking Foundation, refuted claims made by Union Minister for Science and Technology Harsh Vardhan that cosmologist Stephen Hawking 'on record' said the Vedas have a theory superior to Albert Einstein's e=mc^2 theory of relativity.

“I am certain that he did NOT support the claims made by your minister that ‘our Vedas might have a theory which is superior to Einstein’s theory of E=mc2’,” Perry told The Telegraph.

“It is quite possible that he made a reference to the Vedas playfully when discussing creation myths — such as found in the Bible or the Vedas — when comparing them to the now conventional scientific picture of the big bang accompanied by a period of inflation, or perhaps when discussing the noboundary proposal for the creation of the universe," the newspaper quoted him as saying.

Vardhan had yesterday claimed that Hawking, who passed away this week,  said 'on record' that our Vedas might have a theory which is superior to the Einstein's theory of e=mc^2.

Asked to disclose the source to buttress his claim, Vardhan told reporters, “You find the source. He had on record said that there is a possibility that Vedas have a better formula than the one given by Einstein. You also work a bit on this (to find this source),”

He told the reporters that could get back to him in Delhi if they failed in their research.

"I have said this in an open forum. I thought he needs to be remembered (on the occasion).”

A Google search on Stephen Hawking and Vedas throws open several links, one of which, www.Servveda.Org, makes the claim. The website, hosted by the Institute of Scientific Research on Vedas, in turn referenced a post on a fake Stephen Hawking profile on Facebook. A source close to the minister confirmed Vardhan had quoted from the I-SERVE website, reported  The Indian Express.

Einstein's theory of relativity is a critical contribution to modern physics.

For instance, a lecture in the 102nd Indian Science Congress held in Mumbai examined ancient aviation technology in the Vedas and claimed that aeroplanes existed in India 7,000 years ago and they travelled from one country to another and from one planet to another.

The Indian Science Congress is an annual science carnival, which is attended by students, academicians and top scientists from India and the world over.