Varun Khullar: The DJ Who Works His Wheels Well 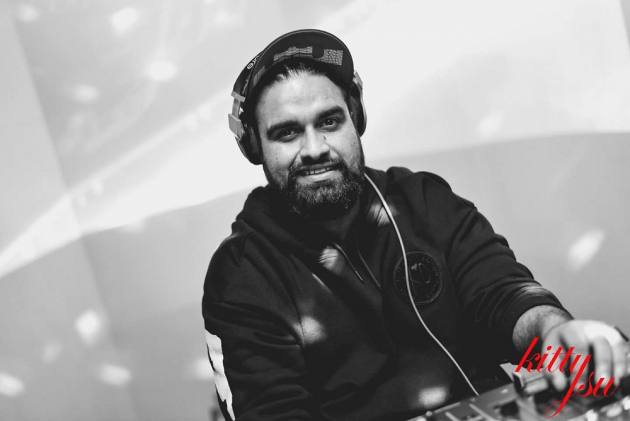 When you enter Kitty Su, it is a given that your body will groove to the beats played. It has one of the finest DJs on board that produce quality music. There was a wave of cheer much louder for an artist that was up next. The atmosphere was filled with smiles and feet waiting to dance their hearts out. Hoots and screams from the crowd rattled the place with a trance-like energy.

The LeD lights were dimmed and there was a spot-light focused on a man with a black hip-hop cap and headphones around his neck. He looked up and raised one hand, pointing it towards the ceiling. The crowd went silent for a moment.

He started his performance with mellow, groovy music. Deep house and Nudisco being his main genres, later escalating to more Commercial and Hip-hop based music. He aced his power to control the energy of the room with extreme subtlety.

After his performance was when I found out that DJ Aamish is a DJ on a wheelchair. I felt proud that India is progressing and moving towards inclusiveness. There are opportunities not only in the business and corporate sectors but, also in fields that are talent and passion driven.

In an interview with Varun Khullar, he told me about his injury that did not stop him from pursuing his dreams.

June 7, 2014 marks a new beginning in Khullar’s life. “I met with a major accident while travelling to Manali and was declared a Spinal Chord Injury(SCI) patient. Which meant I was paralysed below the level of injury,” says Khullar.

The initial two years were a time that Khullar calls ‘depressing’ but, at times he would make it his strength. Books, YouTube and any other source of knowledge became his support systems.

He feels lucky to have friends and family support him through this journey in every way they can. His name DJ Aamish is a combination of his parents’ names Amit and Shashi.

“I have been learning music production since the last 3 years and recently completed a DJ-ing course from ILM  (I Love Music) Academy.”

DJ Aamish, is now a resident DJ at Kitty Su, Delhi. He has performed at various other clubs and pubs like Tamasha and Music festivals like TimeOut 72, Goa and Greesham Utsav, organised by Delhi tourism.

Khullar points out that a lot of places in Delhi lack accessibility and hence, hasn’t been able to perform at various places. Kitty Su, however, has provided him the proper facilities and given him the opportunity to shine.

“When I have my cap on, is when I am DJ Aamish. Without my cap, I’m just Varun Khullar,” he says. “I always have the cap on while performing.”

When asked about mechanisms to deal with judgement, Varun says, “It hardly matters to me what people think and how they react. It’s my dream and I believe in it. That’s what matters.”

When he started performing, there would be people staring at him, astounded and dumbfounded. A of now, he now has a good following and people come to Kitty Su specially for his performances. “Before going on the DJ podium, I tell myself that this is a journey that’s going to connect people.”

There will always be idols and role models that inspire us to become a better version of ourselves. For Khullar, it is Paul Leighton Johnson. He is the world’s first Dj on a wheelchair. Watching him perform made Varun believe that if Paul Johnson can do it, so can he.

“As an aspiring DJ on a wheelchair, Paul Johnson has been the greatest source of inspiration. But, at the end of the day, the motivation should come from within.” Being a DJ and a music producer is close to his heart and has helped him grow as an individual. It has taught him about life.

With a beeming smile on his face, he says, “I can barely feel the depth of my injury, and that’s solely because of music.”