Maduro accused neighbouring Colombia and unidentified "financiers" in the United States, while some of his officials blamed Venezuela's opposition. 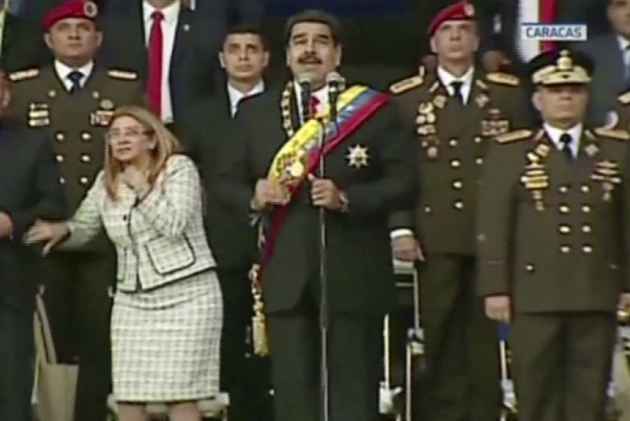 Venezuelan President Nicolas Maduro has said he escaped an "assassination" attempt using an explosive-laden drone, after a live broadcast showed him looking confused when a bang went off during a Caracas military parade and dozens of soldiers scuttling for safety.

His government said seven soldiers were wounded in the incident.

"It was an attack to kill me, they tried to assassinate me today," Maduro said in a later state broadcast, speaking of a "flying object (that) exploded in front of me."

He said some of those involved were arrested and an investigation under way.

Maduro accused neighbouring Colombia and unidentified "financiers" in the United States, while some of his officials blamed Venezuela's opposition.

Colombia denied any involvement. A senior Colombian official speaking to AFP on condition of anonymity said Maduro's accusation was "baseless."

Venezuelan state television images showed Maduro looking up disconcertedly in the middle of a speech on Saturday when a bang was heard, then uniformed members of the country's National Guard lined up in the parade suddenly breaking ranks and scattering.

No drones could be seen in the television broadcast, which showed bodyguards jumping in front of Maduro to protect him with flexible ballistic shields. The broadcast was quickly cut.

"This is an attack against President Nicolas Maduro," Communication Minister Jorge Rodriguez said. 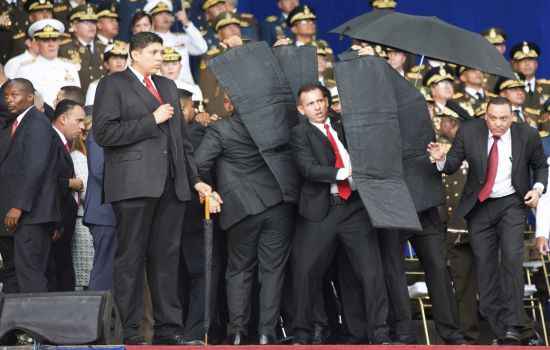 Rodriguez said there was "an explosive charge... detonated close to the presidential podium" and in several other spots along the parade held in central Caracas.

Maduro "came out of it completely unharmed," he said.

The government pointed the finger at "the ultra-right wing" -- its term for the opposition.

But Maduro said, "I have no doubt that the name (Colombian President) Juan Manuel Santos is behind this attack."

He added that initial investigations "indicate that various of those financing it live in the United States, in the state of Florida. I hope that President Donald Trump is ready to fight these terrorist groups."

The parade Maduro attended was to mark the one-year anniversary of the Constitutional Assembly, a legislative body packed with Maduro loyalists that arrogated powers from the opposition-ruled National Assembly.

The head of the assembly, Diosdado Cabello, tweeted that Maduro and the assembled military chiefs had survived a "terrorist attack" he blamed on the opposition.

"The right insists on violence to take areas it can't through votes," he wrote.

Maduro has remained in power over Venezuela, a major oil exporting nation, despite a collapsing economy and a long-running political crisis that has seen his country isolated internationally.

Hundreds of thousands of Venezuelans have fled the country, where food and medicine are in very short supply, and where inflation this year could reach as high as one million percent according to the International Monetary Fund.

Maduro, a 55-year-old Socialist leader who took over from his late mentor Hugo Chavez in 2013, has effectively sidelined the fractured opposition through control of the courts and the electoral body -- and undinting support from the military, which holds key posts in his government.

Maduro often accuses the opposition and the United States of working together to foment a "coup" to topple him.

He says the economic malaise gripping Venezuela is an "economic war" and any unrest is plotted by foreign powers.

A year ago, four months of street protests flared against his authority that were put down by robust action from the army, the National Guard and police, resulting in 125 people killed.

One of the key reasons for the protests was the creation of the Constitutional Assembly, which aimed to short-circuit the National Assembly in which the opposition won a supermajority in 2015 elections.

The Supreme Court declared the National Assembly dissolved. Although it continues to operate, its decisions are routinely annulled.

The United States and other countries have expressed alarm at the loyalist structure propping up Maduro, saying Venezuelan democracy was being undermined.

Maduro this year brought forward to May presidential elections that -- after they were boycotted by the opposition and key opposition figures were declared ineligible -- handed him a new six-year term.

Meanwhile, a mysterious rebel group made up of Venezuelan civilians and military on Sunday claimed responsibility for an "assassination" attempt on President Nicolas Maduro, according to a statement posted on social media.

"It is contrary to military honour to keep in government those who not only have forgotten the Constitution, but who have also made public office an obscene way to get rich," the group said.