Beni Sumer Yanthan (Yanbeni ) is a poet and folklorist from Nagaland belonging to the Lotha-Naga and War-Jaintia tribe of Meghalaya. Her poetries illustrate deep anguish of AFSPA victims. 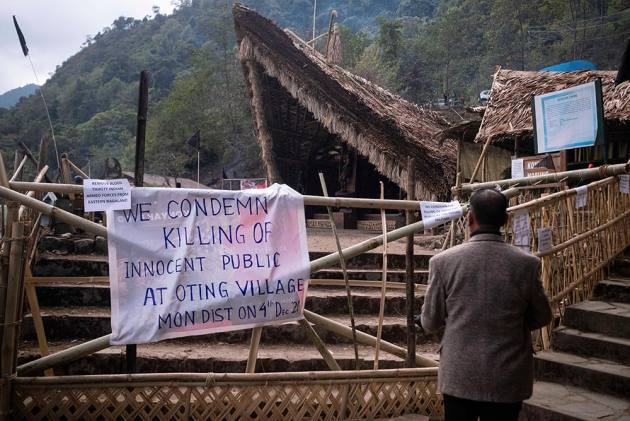 The recent killings of 15 civilians by security forces in Nagaland's Mon district has sparked  debate over the controversial Armed Forces Special Powers Act (AFSPA), a draconian law that provides unshackled discretionary powers to the armed forces over civilians.

"Oting" was written on an impulse. In my entire adult life, I had never personally seen so much collective sorrow, frustration, fear, helplessness and dread in Nagaland so perhaps writing this poem was in some way, an attempt to make sense of it, to provide some closure, to write an epitaph for the slain brothers of Oting.

Brother,
Your blood has drenched this earth
And soaked up our sins,
Your silent screams now hang above
This parched town
Where the mist gathers at dusk
To pay homage to your last moments.
Your body became the battlefield
Of a republic at war with itself,
Your song is now a bloodied dirge.

Know, in you passing, you have kindled
The fire in our revolutions,
Know, you have shaken
The poetry out of the mountains,
Know, into this night we go,
Smelling of coal and dust and blood
And splintered stories –
Into this new world with you.

Because I and my mother,
Thrown together,
Producers of sons and mutinous poetry
Have no identity of our own.

We are anonymous echoes
in a dynasty of sound,
gathering air in our lungs
to deaden our sobs.

We belong to men,
Whose blood and bones are sewn
Inside our wombs -
Like alphabets in a 2500 page verdict
Congealing to form a death sentence,
They own us in black and white.

Dimapur
Only in this town can you see the innards
of a city strewn about in empty Officer’s Choice bottles,
and the value of whores in a
top-up recharge.

In here, the night wraps itself
like a shroud across your body
and a pasture of broken glass
croaks an ancient lullaby.

The air sways to the rhythm of adolescents
who bark consequentially – Lawra!!
And lactating mothers circle the air with baby linen.
At 35C and rising.
Praise the Lord. It is the Lord’s will.

Nights sink inside a water colour of soiled silver.
Rhythmic clacking of fingers and keypads accompany
their tarnished glow.

They wax and wane until they enter
the dreams of tortured lovers and once there,
they take the guise of beautiful rhododendrons,
while the smell of burnt omelet moves between
the bumpers and the honks -
carrying the poet’s diagnosis