It will carry out an extensive public contact programme to reach out to the people belonging to various castes with the message that "all Hindus are one". 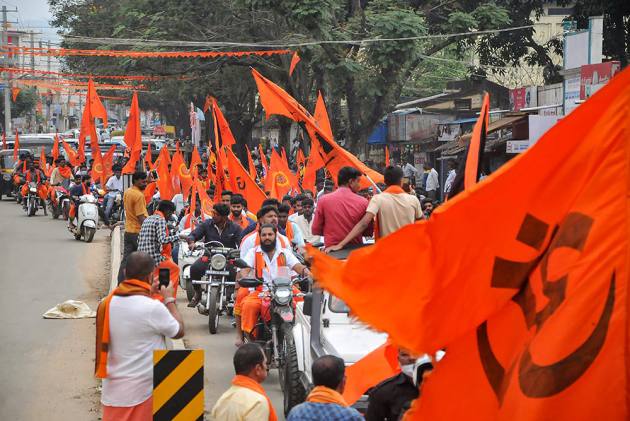 The Vishva Hindu Parishad (VHP) will roll out on Friday a 10-day nationwide campaign to bridge the caste-divide in Hindu society and spread the message that "all Hindus are one". During the 'Samrasta Abhiyan', which will conclude on January 23, the saffron outfit will organise various programmes including a 'Sah Bhoj' -- an event for people belonging to upper and lower castes to join and dine together.

It will also carry out an extensive public contact programme to reach out to the people belonging to various castes with the message that "all Hindus are one". Ahead of the launch of the campaign, VHP national secretary and Akhil Bharatiya Samrasta Pramukh Devji Rawat Thursday held a meeting with the office-bearers of the saffron outfit and those of its various wings in Uttar Pradesh. He also participated in a 'Sah Bhoj' organised in Sharda Nagar of Kanpur district.

"We are going to start a 10-day Samrasta Abhiyan (campaign for social harmony) across the country from January 14 on the auspicious occasion of Makar Sankaranti," VHP national spokesperson Vinod Bansal told PTI.

"The aim of the campaign is to bridge the caste-divide, end inequality and strengthen the Hindu society," he added. This comes ahead of the assembly elections in five states including Uttar Pradesh where two prominent OBC leaders -- Swami Prasad Maurya and Dara Singh Chauhan -- resigned from the Yogi Adityanath government. Three BJP MLAs also quit the party.

Speaking to PTI, Rawat, who is spearheading the campaign, said that 'Samrasta Abhiyan' will be carried out by the activists of the VHP and its wings including Bajrang Dal across the country to take the message to the masses that “all Hindus are one, no matter which caste they belong to”.

"A meeting of the office-bearers of the VHP, Bajrang Dal and those of other wings of the VHP was held here in Kanpur today and plan for organising various events in 300 'Seva Basti' (slums) in the Kanpur was finalised,” he said.

"On the eve of the rollout of the nationwide campaign, a 'Sah Bhoj' was also organised in Sharda Nagar," he added. Rawat further said, "During the nationwide programme, various events like meetings with community members, Sah Bhoj, Ram Khichdi, Padyatras by (Hindu) saints will be organised across the country. The activists of the VHP, Bajrang Dal and other wings will organise the events in their respective areas."

"Events will be organised to recognise the contributions of the intellectuals, doctors, litterateurs and other eminent persons belonging to the scheduled castes and other underprivileged sections of the Hindu society," he said.

"With an aim to bridge caste divide and end inequality in the Hindu society, contact programmes will also be carried out across the country. Through the campaign, we will take the message to the masses that all Hindus are one, no matter which caste they belong to," he said.