Vicky Kaushal: Replacing Irrfan Khan For Sardar Udham Is My Tribute To Irrfan, An Actor Whom I Love And Admire

Actor Vicky Kaushal wants the audience to feel that there is a Sardar Udham in all of us. 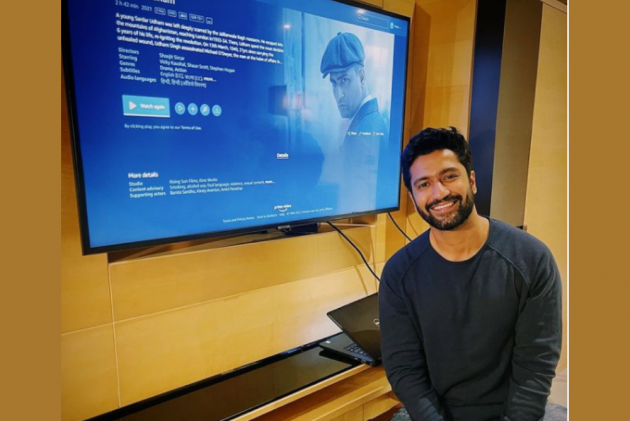 Vicky Kaushal, who plays Udham Singh in Sardar Udham, mentions how emotionally drenching it was in recreating the Jallianwala Bagh massacre. He was not the first choice of filmmaker Shoojit Sircar for the role. Irrfan Khan was supposed to play Udham Singh, but he had to back out due to bad health. Vicky says it’s an honour to replace Irrfan. Excerpts from an interview with Outlook’s Lachmi Deb Roy:

Preparation for the role

Coming from a Punjabi family, I was culturally familiar with Udham Singh. I have been raised with stories on Jallianwala Bagh, Sardar Udham Singh and was not just dependent on history books. So, when I got this part, I was aware about who the great freedom fighter was. But the journey of this person and his emotional make-up was a revelation. When it came to physical preparation, I realised that I had to play both a 20-year-old Udham as well as a 40-year-old Udham. So, I had to reduce 14 kgs to play the 20-year old and had to immediately gain all of it in 25 days to look like a 40-year-old.

When it came to mental preparation, I had to depend on Shoojit Sircar’s vision of Sardar Udham Singh--how he wanted Udham Singh to come across to people. When we generally portray freedom fighters, we show them as superhuman beings. But here we wanted to make him very human; a person whom you can touch. We wanted the audience to feel that there was a Sardar Udham in all of us--that was the approach we took. There was obviously a lot of research material that Shoojit, in his 21-year journey to make the film, has done. And I must say I have never come across someone who has studied the freedom struggle and the nationalist ideology of freedom fighters in such depth. So, I was actually lucky to get on board.

Challenging scene from the film

Recreating the Jallianwala Bagh massacre. That was really hard-hitting not only for me, but for everybody. It was physically taxing and at the same time emotionally drenching.

How much of cinematic liberty was taken?

There is a fragment of imagination in the film, but that is only to join the dots. The dots were there from the data that we could acquire from the archives. So, the dots were there, the boundary was set, but our job was just joining the dots. So, from going to point A to point B, nobody knew because it was not documented at all. The emotional graph of that journey was something that was imaginative. That is the freedom fighter Shoojit wanted to show to the world. But apart from that, the incidents that took place in the film are based on research and are absolutely true.

It was made for a theatrical release. But I guess times have changed very rapidly in the past 18 months--we have all been a big consumer of OTT platforms. There are a lot of pros when the film comes out on Amazon Prime, because as Shoojit says, it is not a Bollywood film; it is an Indian film. So, this Indian film needs to reach viewers across the globe and that is possible only through OTT platforms. This film is going to reach Indians all over the globe. It is important for them to connect to our history and realise the sacrifices that have gone into attaining freedom. And also, for everyone to remember the Jallianwala Bagh massacre. With a theatrical release there is always pressure that the film is going to go out of theatres the coming Friday. With OTTs, it is timeless--even if you don’t feel like watching it today, you can watch it ten days later. That is the kind of freedom OTT platforms give.

How younger generations could be inspired

I will be happy if everybody feels that there is a Sardar Udham in all of us. While he was making the film Shoojit said that Udham is my friend and he is always with me. And that’s how I want people to feel--that he is with us. We don’t want him to be a martyr in history books that you read, then just close the book and keep it aside.