Pandya smashed 20 fours and three sixes in his whirlwind 100-ball knock while forging a 139-run stand for the fifth wicket with Vishnu Solanki. 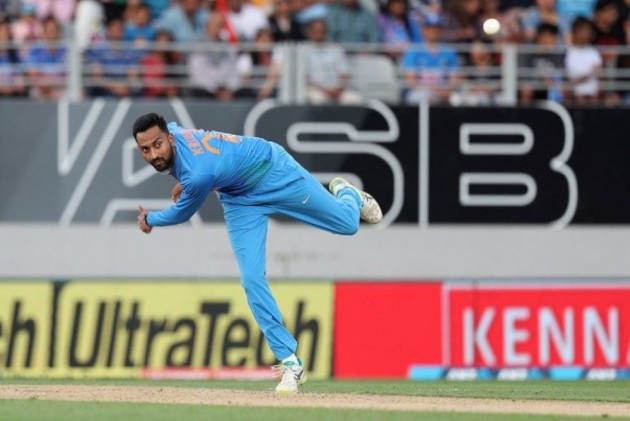 Skipper Krunal Pandya's unbeaten 133 formed the cornerstone of Baroda's 13-run win over Chhattisgarh in an Elite Group A game of the Vijay Hazare Trophy in Surat on Friday, even as Atit Sheth blazed away to a 16-ball 51. (More Cricket News)

Opting to bat, Baroda rode on Pandya's hundred and Sheth's big-hitting to post 332/6 after a top-order failure, and then restricted the opposition to 319/9 to record their fourth win on the trot.

Baroda lost openers Kedar Devdhar (12) and Smit Patel (13) cheaply and was teetering at 29/2. Medium pacer Sourabh Majumdar (2/85) accounted for both the wickets.

It became 39/3 after Abhimanyusingh Rajput (5) perished cheaply. But Vishnu Solanki (78 off 99 balls, 8x4) and Pradeep Yadav (32) started the rescue act and added 53 runs for the fourth wicket.

After Yadav departed, in walked skipper Pandya, who was in his element and toyed with the Chhattisgarh attack.

The left-hander smashed 20 fours and three sixes in his whirlwind 100-ball knock while forging a 139-run stand for the fifth wicket with Solanki.

Chhattisgarh pegged Baroda back by taking two quick wickets, but Sheth, who walked in at number eight, smashed seven sixes while helping his team to a formidable total. Pandya and Sheth added 89 runs for the unbroken seventh wicket.

However, skipper Krunal broke the partnership by removing Singh in the 35th over. And, in the next over, left-arm spinner Ninad Rathwa sent back Khare to leave them teetering at 5/185.

Shashank Singh (32) and Ajay Mandal (65 not out off 46 balls; 5x4, 3x3) added 48 runs as they inched towards the target, but the former was caught by Kartik Kakade off pacer Atit Sheth when they still needed another 100 runs.

Mandal gave Baroda a scare but their bowlers held their nerves to eke out a narrow win.