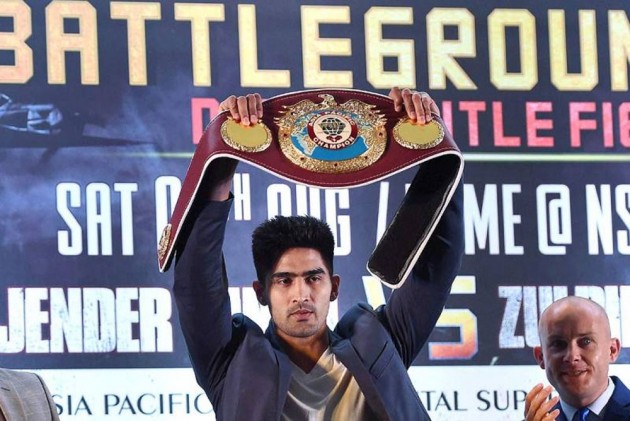 It will pave the way for the undefeated Indian boxer to make his debut in the United States, the most lucrative market for professional boxing.

Vijender's India promoters IOS Boxing said in a statement that the celebrated boxer will make his US debut next year, reports PTI.

Vijender, 33, has fought all but one of his professional bouts in India and England. The 2008 Olympics bronze-medallist will make his debut under the Top Rank banner in early 2019.

"Top Rank is very excited to enter into a contract with Vijender," Arum said in a statement on Monday night here.

"We intend to make him a big star in the United States and look forward to him participating in major events in India, where he is already a major superstar."

Arum is an International Boxing Hall of Famer and has worked with several big names in the circuit, including the likes of Manny Pacquiao.

Vijender, who has a 10-0 (7 KOs) record in the circuit since turning pro in 2015, said he couldn't have hoped for a better deal. He has been associated with Queensberry Promotions, owned by Frank Warren, in England.

"I have always wanted to work with someone who is the best in the business, and I know Top Rank has been the driving force behind boxing's biggest superstars, including Oscar De La Hoya, Floyd Mayweather, and Miguel Cotto," he said.

"I am eagerly waiting a date for my U.S. debut to take on the world and keep the Indian flag on the world boxing map fluttering high," he added.

IOS Boxing's Neerav Tomar said his company fetched the best for the Indian superstar, whose amateur career has also been path-breaking.

"...Bob has done so much for professional boxers over the years and has been instrumental in building the careers of so many of the best boxers in the world today. We are honoured to be promoted by him," he said.

The 33-year-old Vijender was India's first boxing medallist at the Olympics and also won the country's maiden world championship medal in 2009. He won a gold at the 2010 Asian Games.

However, he hasn't competed this year and his last fight was in December 2017, a 10-round decision against Ghanaian Ernest Amuzu in Jaipur.