Violence In West Bengal During Elections Is Not New, The Media Glare Is

The 2018 Panchayat Polls reported 23 deaths so far and the numbers are expected to go up with several critically injured people languishing in hospitals. 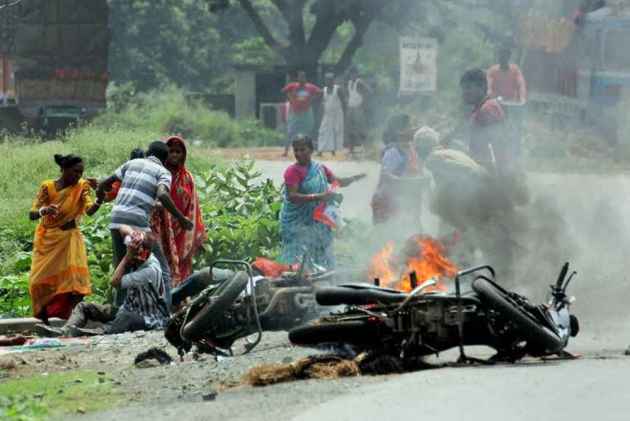 The one word being used to describe the violence that gripped West Bengal during this week’s Panchayat elections is “unprecedented”.  But while there is general consensus – give or take a few discordant voices from the defense administration – that the state has never witnessed violence to this magnitude in any previous rural election, no one has, or legitimately can, claim that violence itself is new to elections here.

Indeed one of the most outrageous debates going on between the Opposition political parties and the ruling Trinamool post the polls is during whose reign the state witnessed more poll-related deaths. To the BJP, the Congress and the CPI(M)’s allegation that Trinamool wins hands down in this regard, the Trinamool retort has been an enumeration of the numbers of people killed during the Left rule. Why even one person should die because of violence during an election in a democratic country is a question that does not seem to have occurred to these political parties. Perhaps they have grown inured to such self-reflection given the bitter truth that West Bengal elections have, indeed, never been free of violence.

And of all the elections, it is the rural polls that have always been most hit. There are several reasons for this. The first is that these elections are about the control of money. “Most of us try and get a chance at becoming a part of the Panchayat at least once,” a villager in Nadia’s Meghna Chor village said. He openly admits that this is because, “Once one becomes a Panchayat member one’s life is made. They will keep receiving government funds for the rest of their lives.” This coupled with the fact that Panchayat members have access to the funds that governments dole out for public distribution schemes, which, it is an open secret, manipulated and lands up in the hands of the corrupt, makes it a lucrative profession. But not just for individuals, taking control of Panchayats is deemed high priority for political parties too. Coupled with control over the money, controlling the local governments on the ground strengthens the party’s roots.

“During the 34-year Left Front rule in West Bengal the Panchayats have been mostly in the control  of the Left parties too,” Bengal political expert Tarun Ganguly tells Outlook. The veteran who has covered Bengal elections for over four decades says that Panchayat elections have traditionally been given a great deal of importance.

Indeed horror stories of rigging, booth-capturing, booth-jamming and voter-intimidation had emanated from the remote districts during the Left rule too. A former police commissioner speaking to Outlook on condition of anonymity said, “What made the violence more rampant during rural polls is the fact that these elections take place in remote corners of the state, out of the monitoring eyes of the media.”

Indeed the crucial change that has taken place in election reporting in recent times is the media glare.  News video cameras are now not just travelling to the most distant polluting booths but is live streaming what they are capturing on the ground.

The 2018 Panchayat Polls reported 23 deaths so far and the numbers are expected to go up with several critically injured people languishing in hospitals.  Of the deaths that took place, there are reports that at least 13 of them belong to the Trinamool itself. It has been pointed out that much of the clashes that are taking place is not just between the Opposition BJP, Congress and CPI(M) but also between different factions of the TMC. In many cases TMC breakaways who are contesting the elections as Independents have been targeted.

Let’s take a quick look at what went before in West Bengal’s recent history of rural polls: