Violinist M.S. Anantharaman No More: The Man Who Looked A Thoroughly Satisfied Soul With Or Without The Instrument

Indian classical music lost one of its greatest exponents when Carnatic-Hindustani violinist M.S. Anantharaman died today. A look at the instrumentalist’s lineage, contributions and progeny. 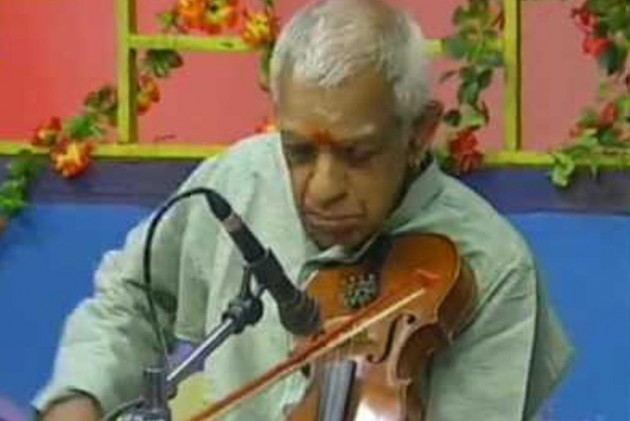 Even when it was amidst the music crowd the veteran moved in his native Chennai, unaggressive M.S. Anantharaman looked like someone who perhaps happened to stray into the concert hall on his way to the roadside market to buy ash gourd for the next day’s sambar at home. Much like that modest and cool vegetable, the old man’s inside appeared peaceful and his forehead smeared with vibhuti between the greying hair and stubble.

MSA, as he was fondly called, never chose to show off his artistry that had a pan-Indian reach and global appeal. Primarily a Carnatic instrumentalist, his professional history bears bright spots of having accompanied an M.S. Subbulakshmi of his own metropolis as well as Omkar Nath Thakur, the 20th-century Hindustani legend of the Banaresh gharana. Equally adept in giving solo shows, MSA’s lineage traces to one that introduced the violin to north Indian classical even while firmly rooted in its down-country stream.

M.S. Anantharaman passed away at his Chennai home today (February 19, Monday) six months short of turning 94. The end came five years after the death of his equally renowned violinist-brother M.S. Gopalakrishnan—and 54 years after their Sundaram Iyer breathed his last.

Iyer belonged to a Tamil family that had migrated to Parur, a coastal town 25 km north of Kochi but belonged to the Travancore kingdom in the times little Sundaram was born in 1891. Even as a child, Sundaram Iyer showed tendencies of being bilingual in Indian classical music—and by teenage moved to Bombay to learn Hindustani. At the Gandharva Mahavidyalaya there, he learned from none other than its founder Pandit Vishnu Digambar Paluskar (1872-1931). That tutelage churned out a broader slice a history: Hindustani music got the violin added to its repertoire, as 18-year-old Sundaram Iyer played the string instrument at a 1909 concert.

Iyer did serve at the Mahavidyalaya for a brief while, but eventually returned to Madras. The Carnatic hub thus turned out to be the space for his two sons to flourish. MSA and MSG, like their father, gained mastery over both idioms of Indian classical music. Only that MSG was more known for his solo kacheris—something at which the elder sibling also was adept, but remain contented to be more of an accompanist to Carnatic vocalists.

Exactly like his father, the 1924-born MSA groomed his two sons as violinists. Middle-aged M.A. Sundareswaran and M.A. Krishnaswami have for decades now been busy artistes. Their sister, M.A. Bhagirati, is a vocalist, whose daughter Harini is a noted violinist herself. (As for their cousins, MSG’s children M. Narmadha and M. Suresh are, again, known violinists.) Sundareswaran’s son M.S. Ananthakrishnan, too, plays the violin, taking time off his career as an MBA. If clarity of the bowing and transparency of the raga character have been the hallmarks of the Parur school, then MSA had easily been one of its unmistakable legatees. His was a treat that Carnatic buffs enjoyed for almost eight decades, given that MSA debuted as a child of seven years. Those were also times when he would practise on the violin for no less than eight hours a day. Such was his tenacity, which manifested in the manner of another fortune: MSA accompanied not just his father and brother, but sons and grandchildren on the stage. To perform with four generations of one’s own family would be a rare feat—and one that doesn’t come by fluke.

All these least meant that the violin was his sole interest. Much beyond music, MSA was an avid fan of English literature (even in the evening of his life, MSA could fluently recite from John Milton’s Paradise Lost, recalls a buff) and had also learned German (which he learned from Max Muller Bhavan). These, after gaining academic specialisation in mathematics. MSA was also an accomplished teacher of the violin, having taught the instrument at Tamil Nadu Music College in his city called Chennai of late.

MSA’s home had been one that had seen the visits of many a maestro like Carnatic composer Koteeswara Iyer (1869-1938) during his younger days. It has hosted concerts of masters even from upcountry—sitarist Pt Ravi Shankar being one example. MSA, in his further ripened years, carried on that spirit of hospitality by inviting contemporary artistes to his house. Such chamber concerts in large numbers also gave him the reputation of being a binding factor in the Carnatic fraternity. For all the glory, MSA was least flashy. In Chennai’s Margazhi music seasons that bloomed towards the final phase of his life, the old man would drop quietly into the auditorium and sit unobtrusively, watching keenly a new generation unfolding before him. Towards late hours, out he’d go—holding that yellow bag made from a variety of cloth that wasn’t particularly superior to the frill-less dhoti he’d have tucked to the left of his waist.

With or without the violin, M.S. Anantharaman looked a thoroughly satisfied soul.