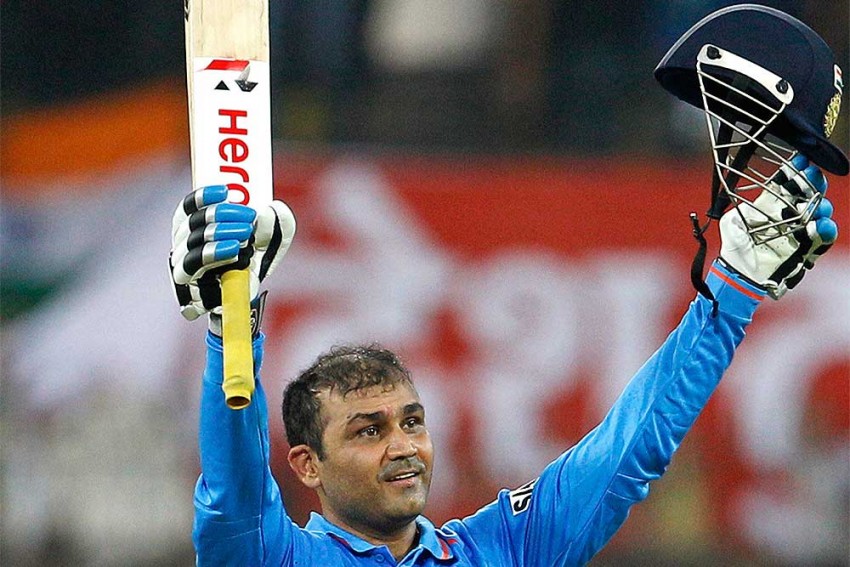 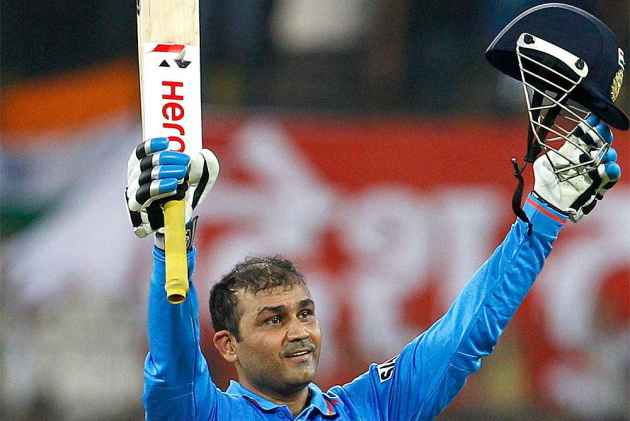 First Zaheer Khan and now Virender Sehwag. In less than a week, India's two most outstanding cricketers of the early 21st century have announced retirement from international cricket. If Khan was respected across the globe as a versatile left-arm fast bowler in the classical mould, Sehwag was held in awe as the most explosive batsman imaginable.

Sehwag was probably the best thing that happened to Indian cricket after Sachin Tendulkar. Not only was Tendulkar his idol; he had moulded himself in the manner of the maestro. Unsurprisingly, there were shades of Tendulkar in whatever Sehwag did at the crease at least in the initial stage of his career. Why, he was even called the clone of Tendulkar.

When Sehwag scored his maiden One-Day International hundred off merely 70 balls, against New Zealand in a triangular tournament in Sri Lanka in August 2001, he could well have been mistaken for Tendulkar. So Tendulkar-like was he in his posture, style and stroke-execution. By a remarkable coincidence, Sehwag had replaced the injured Tendulkar as an opener.

Indeed, there were so many similarities between the two — in height, physique and style in particular — that it was difficult to say, whenever they were batting together, who was Tendulkar and who was Sehwag. In his very first Test, on a green, blistering Bloemfontein pitch against a fiery South African attack spearheaded by Shaun Pollock in 2001, Sehwag scored a blazing 105 with 19 fours, and matched his idol, who also made a hundred, stroke for stroke and added 220 runs for the fifth wicket.

Sehwag repeatedly proved that he was as much a powerhouse of batting as Tendulkar decidedly was. Opponents always feared his ability and tendency to score runs at a breathtaking speed in any situation. Just look at his strike-rates: 82.23 in 104 Tests, 104.33 in 251 One-Day Internationals.

Slowly but surely, Sehwag overshadowed Tendulkar with his relentless attack on the bowlers and voracious appetite for runs. It was after ages that someone had managed to successfully take away some limelight for a considerable time from Tendulkar, the then presiding deity in Indian cricket.

Not too many sportspersons, not certainly cricketers, feature on the cover of TIME. But Sehwag, like Tendulkar, had the honour of being on the cover of the prestigious magazine's annual edition of Asian Heroes in the very beginning of his career. "Cricket is India's national passion; Sehwag its latest object of hope and adoration," said TIME.

It is a vital piece of statistics that the list of Sehwag's 23 Test hundreds include 14 scores of 150-plus. Apart from two triple tons (309 against Pakistan in Multan in 2004 and 319 versus South Africa in Chennai in 2008), he has four double centuries (including an innings of 293 against Sri Lanka at Brabourne Stadium in Mumbai in 2009) to his credit.

By his own high Test standard, Sehwag may not have achieved as much in One-Day International cricket. But 8,273 runs with 15 centuries and 38 half-centuries cannot be considered unimpressive by any yardstick. In keeping with his reputation as the most destructive batsman, Sehwag hit a scorching double hundred (219 off 149 balls with 25 fours and 7 sixes against the West Indies in Indore in 2011) with more than six overs yet to be bowled.

Lest anyone start believing that Sehwag was perhaps interested in his personal glory with an eye on records, let it be emphasised that he was a thorough team-man. He never went after records. But his approach to batting was such that it was just inevitable for him not to make those towering scores.

How unselfish and carefree Sehwag was could be imagined from the fact that he completed his first Test triple ton with a six. Only two Tests ago, against Australia in Melbourne, he was caught by Nathan Bracken off left-arm spinner Simon Katich, attempting a similar shot, when only 5 runs short of what would have been his maiden Test double hundred.

"I never play for myself. So the question of going for some particular records or statistics doesn't arise at all," he once said. "The team is always the first and foremost in my mind when I'm out there in the middle."

Sehwag's devil-may-care attitude sometimes cost him his wicket. But it used to even out as he would score plenty of runs with the same approach. With a bit of carefulness and some selfishness Sehwag would have still plundered many more runs. But it was not his way of living. He had to pay the price on several occasions, including losing his place in the Indian team, but each time he came back stronger except in the last phase of his career.

One of the most popular Indian cricketers ever, Sehwag was not short of detractors, who kept finding faults with his technique and mocking his alleged lack of footwork and elegance at the crease. But Sehwag, who neither bothered about the subtleties of batting nor cared for the cognoscenti, almost invariably retaliated by punishing the best of bowlers and scoring prodigiously in his inimitable style.

Peter Roebuck, the late iconoclastic English cricket writer, had almost lampooned Sehwag for what he called his "rustic technique" and "wayward or no footwork at all" in his early years in international cricket. To be precise, he had severely criticised Sehwag on the eve of India's tour of Australia in 2004.

But Sehwag answered with a whirlwind 195 in Melbourne and, two Tests later, a majestic, historic 309 in Multan and made Roebuck eat humble pie. As Sehwag went from strength to strength, and began massacring the bowlers across the world, the brutally frank and honest Roebuck had no other option but to join the bandwagon and praise the "monster" for the rest of his life.

Sehwag, who hailed from the nondescript Najafgarh, a New Delhi industrial suburb, achieved a celebrity status and stardom on the strength of his questionable technique and footwork, which always baffled the purists. But, like a true gentleman and sport, he never boasted about his achievements. Nor forgot his humble origins.

At heart, Sehwag has always remained the same simple, humble, cheerful chap of Najafgarh. "I wouldn't have been able to see this, if I weren't a cricketer," he once told the pilot of a jumbo jet while gazing at the gleaning dials and the skyline of Mumbai from the cockpit.