Barren Island, located 135 Km north-east of Port Blair, is the only active volcano in South Asia. 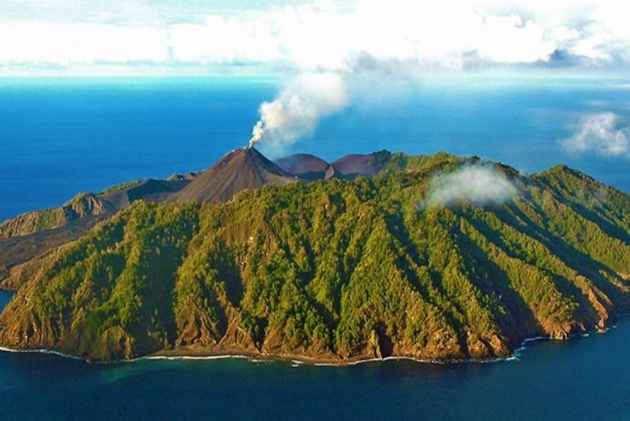 A recent study by scientists from the Indian Space Research Organization has concluded that the volcanic spewing that happened in 2017 in India’s active volcano site - Barren Island - is a continuation of the eruption that took place in 2005.

Barren Island, located 135 Km north-east of Port Blair, is the only active volcano in South Asia.  This 3-km wide island has 2-km wide depression which had resulted from massive eruptions in the past. The first massive eruption in volcano took place in 1787. In 1991, it erupted again after remaining dormant for about 150 years. Since then the volcano is showing intermittent activity. The most recent episode was reported in January 2017 by visiting scientists.

In the present study, scientists used satellite data to understand changes the volcanic region in terms of shape, area and path of lava flows from the year 2005 to 2017. Small land area of the island and surrounding sea hindered creation of a three-dimensional image of this volcano using radar techniques. Therefore, researchers used satellite images acquired in visible, short-wave infrared, and thermal infrared bands to identify changes in shape of the volcano.

A large depression around the active vent —a hole spewing out gases, ashes, and lava— is hallmark of a volcanic eruption. The satellite images showed that vents which were active during January 2017 were located in a depression formed by volcanic eruption of 2005 and not 1991 confirming that the recent volcanic activity is a continuation of eruption that took place in 2005.  Scientists also found that eruption in 2005 has created passages of the lava flow in three different directions. Earlier lava was flowing only in the west. They also confirmed that the lava extrusion from this volcano has also increased post-2005 eruption.

Volcanic eruptions which release toxic gases, ashes and lava have a long-term effect impacts on vegetation and make the place inhabitable for wild animals. These eruptions increase air pollution by releasing carbon dioxide and sulphur dioxide into the atmosphere. Although, the incidence of a volcanic eruption is often difficult to predict but constant monitoring of these eruptions may enhance our understanding of the causes and outcomes of these volcanic eruptions and help us to devise mitigation strategies.

The results of this study were published in journal Bulletin of Volcanology. The research team included Tapas R. Martha, Priyom Roy and K. Vinod Kumar from the Geosciences Group, National Remote Sensing Centre (NRSC) of ISRO.