Thematic posters were put up on city buses, special camps were held and social media campaign was intensified to disseminate awareness messages for voters' enrolment during the month-long special summary revision of Delhi's electoral roll which ended on Tuesday. 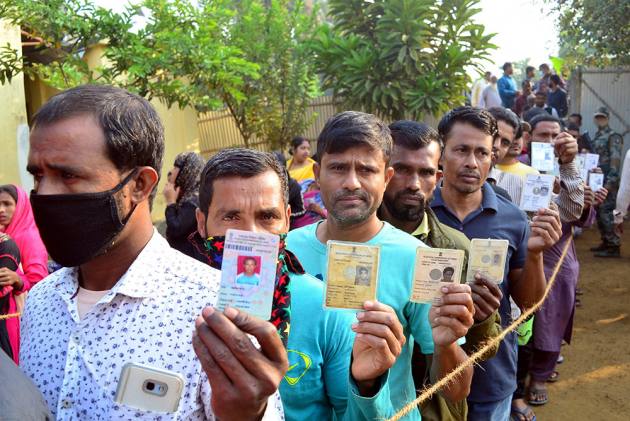 Officials in the Delhi CEO Office said the exercise, carried out as "festival for the electorate", was "very fruitful".

During the special summary revision-2022 (SSR-2022), which started on November 1, any person who would be 18 years or more on or before January 1, 2022 was eligible to enrol as a voter. The final roll will be published on January 5.

"The SSR-2022 exercise ended today. Now, all the forms submitted during the past one month for voter registration, addition and modification of details, deletion of deceased voters, will be processed till the final roll is published in January. The exercise was very fruitful," a senior official told PTI.

The office of the chief electoral officer (CEO) of Delhi had made preparations to ensure the process took place smoothly and no voter was left behind.

"We have planned to carry out this exercise in the spirit of a festival. So, the month-long period is being called a 'Voters Utsav'," Delhi's Chief Electoral Officer Ranbir Singh had said on November 1, while announcing the start of the SSR-2022.

Special posters were mounted on city buses, and digital posters were put up on its Facebook and Twitter handles to raise awareness about the exercise. Posters carry the tagline 'Dilli ka Voter Utsav' and a slogan 'Chalo Voter Bane Hum '.

According to the draft roll published on November 1, 2021, the total number of electors stand at 1,47,95,949, showed the data shared by the CEO Office earlier.

There is a decrease in the number of both male and female voters in the draft roll vis-a-vis the one published on January 15, according to data shared by the Delhi CEO.

Delhi's last electoral roll was published in January 2021, according to which the total number of eligible voters in the city had then stood at over 1.48 crore. Special Summary Revision (SSR) of electoral roll with respect to January 1, 2022 as the qualifying date, was done in all 70 Assembly constituencies of Delhi.

The CEO Office carried out a number of outreach programmes during the one-month exercise and in the run up to the special summary revision. Special camps were held on November 27 and 28 across all polling stations in the city to facilitate enrolment of voters, as part of the SSR-2022.

A special stall was opened at the Delhi Pavillion of the just-concluded India International Trade Fair (IITF) here to facilitate voters, especially the youth.

Delhi CEO Singh on November 17 had directed all district election officers (DEOs) to speed up the process of enrolling young electors in the age brackets of 18-19 and 20-29 to address the issue of their "under-representation in the electoral roll," officials had said.

Ahead of the exercise, Singh had appealed to all newly eligible and all left-out voters to immediately download the voters app and register in the voter list during this SSR.

"Today's youth is tech-savvy and spends a lot of time on social media. We should therefore interact with them, where they spend their time the most and motivate them to become proud voters of our great democracy," he had said.