The 18-year-old said until the government avenged her father's death, any talk about dialogue with Pakistan was useless to her. 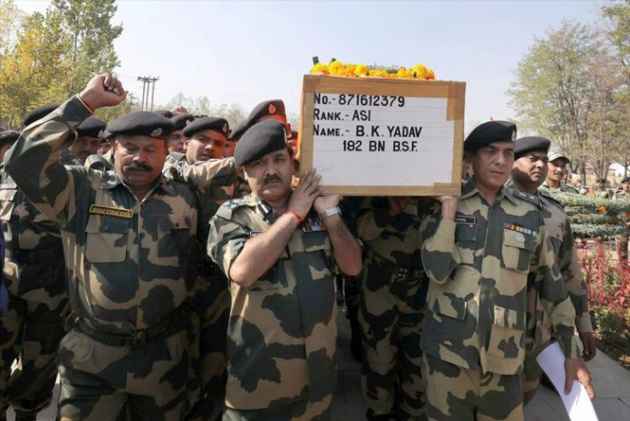 The daughter of BSF assistant sub-inspector Brij Kishore Yadav, who was killed in a pre-dawn attack on the force’s camp in Srinagar on Tuesday, has demanded a similar action from the Indian government.
The 18-year-old said until the government avenged her father's death, any talk about dialogue with Pakistan was useless to her.
"We want 100 Pakistani terrorists' heads for my father's sacrifice," his daughter Sushma Kumari said, according to news agency IANS.
“We want strong action against Pakistani terrorists,” she said adding that her family and residents of native village Kamalchak in Bhagalpur district of Bihar were proud of her father’s sacrifice.
Yadav was to be cremated at Kamalchak village on Wednesday evening.
Bihar chief minister Nitish Kumar has announced Rs 11 lakh and Jharkhand chief minister Raghubar Das Rs 2 lakh.
Security forces foiled the attempt by the Jaish-e-Mohammed to storm a BSF camp near the high- security Srinagar airport, killing all three militants in an operation that also claimed the life of Yadav.
Three BSF jawans also sustained injuries when the militants entered the BSF battalion headquarters at Gogoland, adjacent to the airport.