War-Torn Yemen Is Today A Living Hell For Every Child: UN

30,000 children die of malnutrition each year in Yemen, while a child dies every 10 minutes from easily preventable diseases. These figures are "a reminder for all of us to realise how dire the situation has become," said a top UN official 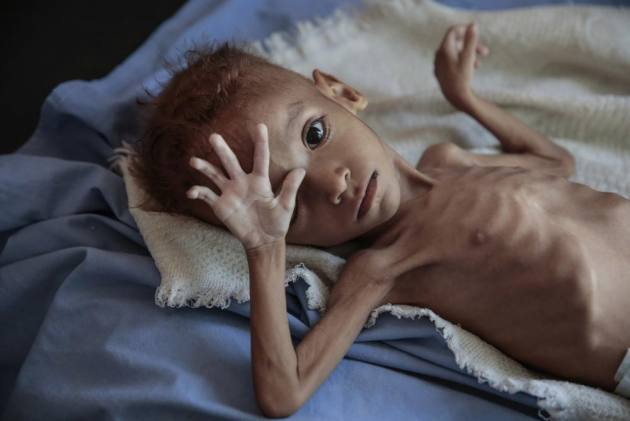 A top UN official on Sunday said that war-torn Yemen has become a "living hell" form every child in the country with thousands dying every year from malnutrition and easily preventable diseases.

Geert Cappelaere, regional director for the Middle East and North Africa at UN children's agency UNICEF, called on the warring parties to join proposed peace talks later this month and agree to a ceasefire.

"Yemen is today a living hell -- not for 50 to 60 percent of the children -- it is a living hell for every boy and girl in Yemen," he told a news conference in the Jordanian capital.

According to UNICEF, 1.8 million Yemeni children under the age of five suffer from acute malnutrition, and the lives of 400,000 severely affected children are under threat.

Cappelaere said that 30,000 children die of malnutrition each year in Yemen, while a child dies every 10 minutes from easily preventable diseases.

He said the figures were "a reminder for all of us to realise how dire the situation has become".

"We call on all parties to get together later this month under the leadership of the UN special envoy... and agree on a ceasefire and a road to peace for Yemen," he added.

The appeal came as fighting intensified in the key rebel-held Red Sea port city of Hodeida, despite growing international pressure to end a conflict that has left the country on the brink of famine.

The port is the entry point for more than 70 percent of imports into the impoverished country.

Saudi Arabia and its allies intervened in the war in 2015 to bolster Yemeni President Abedrabbo Mansour Hadi after the Huthi rebels took over the capital Sanaa.

According to the World Health Organization, nearly 10,000 people have since been killed. Some rights groups estimate the toll could be five times higher.

The government said Thursday it was ready to restart peace talks with the Huthis, after a surprise call by the United States for an end to the war, including air strikes by the coalition.