And now we have travel companies offering special travel packages to conflict zones. 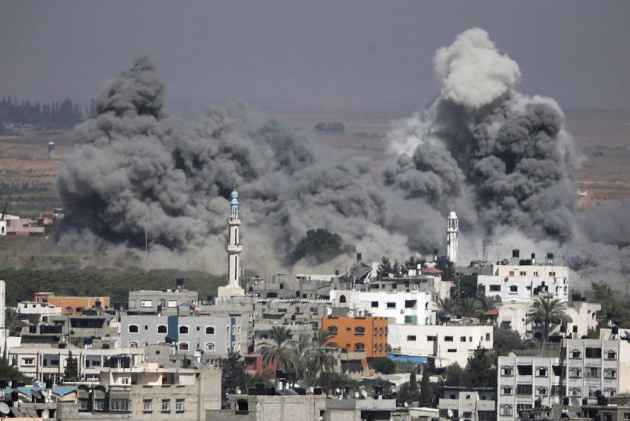 No, it is not just a catch phrase. There are actual travel companies —such as War Zone Tours, Political Tours and Untamed Boarders —offering special  travel packages to conflict zones: Iraq, Somalia, Syria and Israel. Fares can range from $3500 to as much as $20000 for trips lasting between 5-14 days—for those who want to see the actual war zones in person, with their own eyes.

War tourism has exploded over the last decade in western countries and has attracted a growing number of curious, adventurous and well-off tourists to areas afflicted by violent clashes. While it is not so easy to come up with numbers to measure the growth of the war tourism industry, we can still say the broader ‘adventure-tourism’ industry—which includes travels to conflict areas and politically unstable areas—has boomed over the last recent years.

Debra Kamin, an American journalist based in Tel Aviv who recently wrote about the rise of that phenomenon, in The Atlantic states that “the industry has grown by an average of 65% annually over the past 4 years and is now estimated to be worth $263 billion.”

People have always been fascinated by war. Conflicts have always played a prominent role in the formation and perpetuation of cultures, through different forms of storytelling and through education. Wars, as agents of history making, firmly adhere to the collective psyche and represent deep-rooted fundamental symbols in different cultures that act as imperative tools for the construction of social identity. And that hasn’t changed today. But in the world we now live in, anything that will connect to a large audience will end up being clipped with a price tag. So war has become some sort of a product. And it has been selling well, through the industry of tourism.

War tourism, in its benign form, has always existed. As far as we can remember, people have been visiting sites linked to a history of war. Thousands of tourists agglomerate in areas that have such a past; thousands of curious people routinely visit places such as the Normandy Landing, the Golan Heights or Vietnam’s guerrilla tunnels. Wars have this precedent of fomenting the development of profitable tourism industries in areas where they have happened. For example, the cities of Hiroshima and Nagasaki would never attract as many tourists had the unfortunate events of August 1945 not occurred. According to renowned anthropologist Valene Smith, who has written a number of articles on the sociology of tourism, sites or destinations associated with war constitute the “largest single category of tourist attractions in the world.”

The difference now is that people are paying with the hope of seeing a gun pointed at their face; they don’t want to wait decades until a memorial is built, they want to witness the making of history as it is happening. The rise of this type of war tourism seems to erase the normal time gap that separates the actual events from the formation of a derived tourism ‘good’. People are rushing to Syria, Gaza and East Ukraine nowadays, walking alongside the Red Cross and MSF, not to help, but to see what it’s like. These companies that are selling war zone travel packages have simply understood that a demand-market would easily come alive if such a product could be offered. And they were right, apparently.

The organisations that are conducting this type of business have been criticised by different media organisations about the profound unethicality of their activities. The recent controversy about companies offering tours of towns in Ukraine where ongoing battles between Ukrainians and pro-Russia separatists were raging provides a good frame for the broad ethical issue. Companies are monetising off real people’s tragic daily life and tourists are spending that much money to hopefully witness their pain and suffering; it is true that there is something uncomfortably voyeuristic about this industry.

Debra Kamin hypothesises that the overexposure of people to social media might have been the catalyst that has induced this raging and uncontrollable desire among people to rush to war zones, ultimately to catch the perfect picture and the perfect status update to post on Facebook, on Twitter or on Instagram, and share with their online friends the stories of their unsurpassable travelling adventure.

We have all seen the photos of the Israelis who were watching from distance the bombing of Gaza, comfortably sitting on plastic chairs and taking pictures with their phones. What does that type of behaviour indicate? Studies have shown that being overexposed to images of war through movies, video games, news or else has the effect of desensitising the individual towards violence. It seems that now more than ever, war is a show. And people no longer want to watch it on TV comfortably sitting on their couch or by peaking at artefacts in the silence of a museum; they want to hop on the stage and be part of the whole play.

Moreover, it would be hard not to look at this whole story from the angle of global inequality; the very nature of this industry yields something so caricatural in its obvious representation of two contrasting reality standards. Incidentally, almost all armed conflicts today happen in the developing world, where living conditions are incomparable to those in the West.

It seems that the comfortable prosperous people of all nations, living in their soothed dreamland, have become so disconnected from the entrapped and precarious reality of a major portion of humanity. And the absurd, yet still understandable uneven sides of our world, appear in a striking clarity when a small group of affluent white tourists enjoys the view of damaged homes, the smell of inhumane conditions and the silence of quiet desperation, with their cameras ready in hand and selfies only an Iphone click away. They have paid thousands of US dollars to be walking through a war-affected town in a remote area of Iraq, Syria, Somalia or Israel, like a family wandering around a zoo park staring at captive animals. On that scene, we would never have looked so divided.