Way back in June, a junior police officer of Kashmir had warned of the possibility of attacks in Mumbai and other major cities, but instead of being taken seriously, the officer is presently languishing in prison, for his alleged involvement in the p

The US embassy warning of possible terror attacks by foreign terrorists especially those from Al-Qaeda, in major Indian cities might have been unexpected for the general public, but not for a junior police officer of Kashmir, who had sent a
similar warning to his bosses in Kashmir, way back in June. However, ironically, top brass of Kashmir police did not take the warning seriously and did not find it worth to be shared with their counterparts in New Delhi and other states. And worst, the author of the report, who earlier had warned of a political upheaval in Kashmir in the name of a sex scandal, is presently languishing in prison, for his alleged involvement in the prostitution racket, about which he was the first person to inform his
bosses, much before the racket exploded.

Mohammad Yusuf, a Deputy Superintendent of Police in the counter intelligence wing of the state intelligence, had warned the state government on June 14th about the possibility of attacks in Mumbai, and later serial blasts left nearly 200 people dead and hundreds wounded on July 11th. While the government ignored crucial intelligence inputs, the police official lost his table on June 30th when he was arrested by CBI for his alleged involvement in the infamous 'Srinagar sex scandal'. 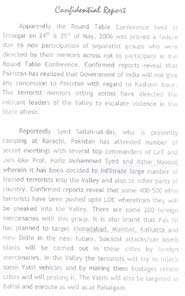 The copy of the said report is with Outlook.

"Reportedly Syed Salah-ud-din, who is presently camping at Karachi, Pakistan, has attended number of secret meetings with several top commanders of LeT and JeM like Prof Hafiz Mohammad Sayeed and Azhar Masood wherein it has been decided to infiltrate large number of trained terrorists into the Valley and also to other parts of the country. Confirmed reports reveal that some 400-500 elite terrorists have been pushed upto LoC wherefrom they will be sneaked into the Valley. There are some 200 foreign mercenaries with this group. It is also learnt that Pak ISI has planned to target Ahmedabad, Mumbai, Kolkata and New Delhi in the near future", records a confidential report, No: CIK/City/CB/06/566 dated June 14, 2006, sent by Yusuf to his superiors.

However, for reasons, better known to the top brass of state intelligence, the crucial report was ignored and same was filed as a "routine information". Mir has been in CBI custody and judicial remand after he was arrested from CID Headquarters on June 30th. Mir is facing charges of sexually exploiting a woman at his official residence and making an attempt to protect two persons by sending cash worth Rs 50,000 and a Pashmina shawl through the same woman to a television news channel, which had interviewed the woman.

In his report, Mir had informed the CID Headquarters that patrons of militant groups in Pakistan had decided to escalate violence in Kashmir and other Indian states after realising that New Delhi was not going to give any concessions to Islamabad with regard to Kashmir issue. He had also predicted massive infiltration of militants into Jammu & Kashmir in the months of June and July.

Nobody in senior echelons of police is inclined to comment why the state government failed to pass on vital information regarding possible blasts to governments of Maharashtra, Gujarat and Delhi. On July 11th seven blasts occurred in different trains in Mumbai in a sequence killing 184 people and wounding nearly a thousand more. On the same day, militants caused serial grenade blasts in Srinagar city in which 8 persons got killed and 43 others were left injured. That series of attacks was clearly targeted at tourists resulting in mass exodus of tourists and cancellation of tour bookings on a large scale.