Was not ready to come back as Maharashtra CM in 1993: Pawar

The veteran parliamentarian said ultimately he did not feel sad on coming back to the riot-hit Mumbai as he got an opportunity to restore communal harmony and bring back the metropolis to normalcy after the 1993 serial bomb blasts. 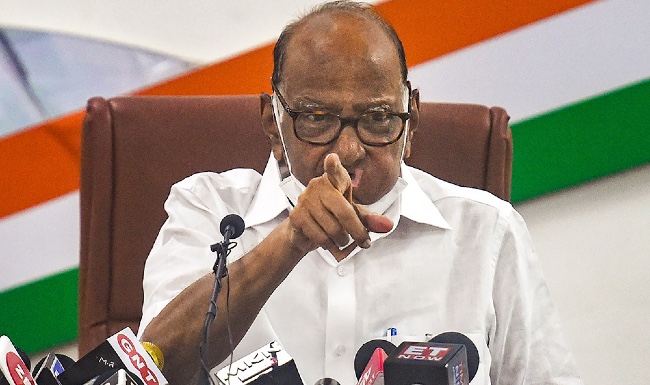 NCP president Sharad Pawar on Wednesday said he was not ready to come back to Maharashtra as Chief Minister from the Centre during riots that took place in Mumbai post-Babri Masjid demolition, but he was "made emotional" and asked to take the reins of the state in 1993.

Pawar also recalled how he "lied" about a "blast" that year which did not actually take place. Pawar, then in the Congress, was defence minister in the cabinet of Prime Minister P V Narasimha Rao and took over as Maharashtra CM in March 1993 replacing the incumbent Sudharkarrao Naik.

Replying to a question whether it was his decision to come back to Maharashtra as CM in 1993 from Delhi, Pawar replied in the negative.

"After the Babri Masjid demolition (in December 1992), riots broke out in Mumbai. The normal life in Mumbai had collapsed for 14 to 15 days. I was the defence minister in the P V  Narasimha Rao government. I was told to go to the state and take the position (as CM)," Pawar recalled.

The veteran politician was speaking at an event in Pune organized by Marathi daily 'Loksatta' whose editor Girish Kuber interviewed him on the occasion. The former Union minister said initially he was not keen to take charge of the state and went back to Delhi, but eventually returned to take over as CM.

Pawar said the reason he had to come back again was that the riots had flared up in the metropolis. "After the riots further intensified, a discussion between PM Rao, (senior Congress leader) NKP Salve, myself, and some other leaders took place and it was discussed that if peace does not come back to Mumbai, a message would go out to the world that the country is drifting away from stability as Mumbai has a special importance around the globe," he said.

The Rajya Sabha MP, a multiple-time CM, said it was an emotional decision for him to come back to his home state and once again handle its affairs. "I was called at the PM's residence and I was told that there is no other recourse than to return to the state. I was not willing to go. For over 6 hours, it was insisted (that he go to Mumbai).

"I was even made emotional and told that the 'state, where I was born and brought and from where I came till here (Delhi), was burning and in such a situation, if you (Pawar ) are not taking the responsibility, it would sadden them'," said Pawar.

The octogenarian leader said in that given situation, he had to take the decision to return to the state. Asked whether his return to Maharashtra created any hurdles in his emergence as a prominent national leader, Pawar said "It could be possible."

Pawar, who left the Congress to form the NCP in 1999, said after coming to the state, he tried to bring communal harmony between communities. Speaking about the March 12, 1993, terror attacks in Mumbai, just days after he took over as chief minister, he recalled that in a span of just 45 minutes, bomb blasts took place at 11 places in the metropolis.

"All these 11 places were dominated by the Hindu community...government offices were located there. I sensed that these blasts may reflect in the conflict between Hindu and Muslims and (other) people, too, shared similar sentiments," Pawar said.

He said to calm frayed tempers, he immediately issued an appeal to people and informed them that bomb blasts had taken place at "12 places" though the actual number was 11. "I said that the 12th spot where the bomb blast had taken place was Mohammed Ali Road, which was a Muslim-dominated area. The objective was to tell both the communities that the attacks were not targeted at just one community," Pawar said.

The veteran politician maintained had he not lied that day, there would have been big riots in the financial capital. "Because of this, nothing happened in Mumbai later. We wanted to send a message that Mumbai was on track. When do people think that Mumbai is on track? When local trains, BEST buses and vehicles carrying milk are running. We ensured that these three things were running the next day (after March 12, 1993 bombings)," he said.

Pawar said one of the sites where the blast had taken place was the Bombay Stock Exchange (BSE). "We started the functioning of the stock exchange and sent a message to the world that the situation in Mumbai was normal and the blasts did not deter the city...everything was in place," he said.

"Had I not returned to the state, a different picture would have emerged. So I had to come (to Mumbai from Delhi) though I had no desire to come back (as CM) ... (but) I was not at all sad. I got an opportunity to face a challenge through this," Pawar said.