Watch: Bus Washed Away By Overflowing Beas Water In Manali

Footages of the dramatic incident were shared widely on social media platforms on Sunday. 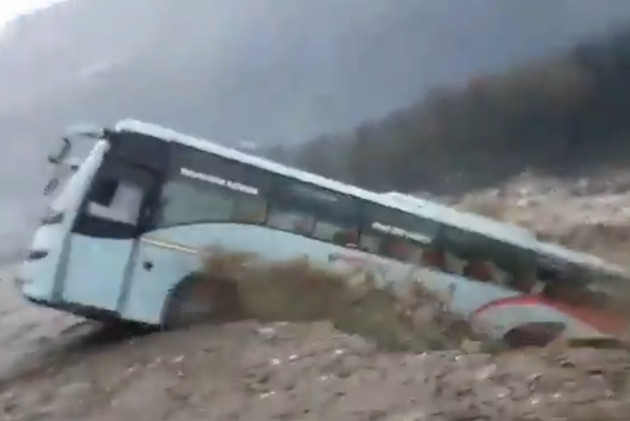 In a terrifying scene showing nature's fury, a luxury bus washed away by the surging waters into the Beas river in Himachal Pradesh's Manali.

Footages of the dramatic incident were shared widely on social media platforms on Sunday, even as warnings of more heavy rains were sounded in the north Indian states of Punjab, Himachal Pradesh, Haryana and Jammu and Kashmir.

Watch it here, courtesy the uploader:

#WATCH: Vacant bus gets washed away into the flooded Beas river in Manali. #HimachalPradesh pic.twitter.com/GMV2nqR2jX

Manali, in Kullu district, receiving heavy rainfall, the water level in the Beas river has risen alarmingly. The rising water has reportedly touched the Chandigarh-Manali National Highway 21 near the Hanogi temple.

All government and private schools will remain closed in Himachal, officials said.

Amritsar Deputy Commissioner Kamaldeep Singh Sangha, announcing the closure of all schools in the district on Monday, said “All officials to remain on standby. The Army has also been requested to be on standby. Hotspots to be identified with clear evacuation and relief plans."

In another development, twenty-nine people stranded in Jammu and Kashmir's Kathua district after flash floods and heavy rains were rescued Monday, officials said.

Traffic on the Jammu-Srinagar national highway, the all-weather road linking Kashmir to the rest of the country, was also restored Monday a day after it was closed due to landslides at different places, they said.

"A total of 29 persons, including six women and 10 children, were rescued from various flood-hit areas of Kathua district during overnight operations," a police officer said.