He clean bowled five batsmen, two of his wickets were LBWs, two caught behind and one caught by another player. But interestingly, he failed to complete a hat-trick. 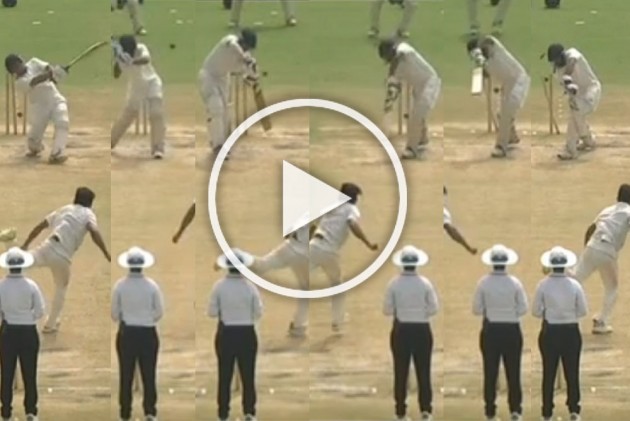 In a rare feat of cricketing excellence, an 18-year-old from Manipur became the latest bowler to take all 10 wickets in an innings.

Rex Rajkumar Singh, a left-arm medium pacer, registered remarkable figures of 9.5-6-11-10 during a Cooch Behar Trophy match against Arunachal Pradesh. As the figures reflect, six of his 9.5 overs were maidens.

He clean bowled five batsmen, two of his wickets were LBWs, two caught behind and one caught by another player. But interestingly, he failed to complete a hat-trick.

The Board of Control for Cricket in India (BCCI) shared a video footage of the young bowler's exploits.

This Manipur boy claimed 10 wickets with his smooth action and beautiful in swingers. Watch as he sends the stumps flying in a Cooch Behar Trophy game against Arunachal Pradesh.
ðÂÂÂÂÂÂ½ï¸ÂÂÂðÂÂÂÂÂÂ½ï¸ÂÂÂhttps://t.co/C41mEewQTj pic.twitter.com/sI6jIdiiNv

This young boy from Manipur who took 10 wickets in an innings reminds one of @IrfanPathanhttps://t.co/ldm2Tr2P1o

The International Cricket Council (ICC)reports that Rex's efforts helped Manipur bowl Arunachal Pradesh out for a paltry 36 in their second innings at the Rural Development Trust Stadium in Anantapur on Tuesday (December 12).

Manipur, who had posted 122 in their first innings in response to the opposition's 138, got the 55 runs they needed in 7.5 overs to complete an easy 10-wicket win.

Rex, who had made his first-class debut in the Ranji Trophy this season, finished with 15 wickets in the match, having taken 5/33 the first time.

The first record of an Indian bowler taking all ten wickets in an innings was when legendary Gupte bowled out Pakistan Services and Bahawalpur CC in 1954. His figures were 10/78.

Bengal's PM Chatterjee registered figures of 10/0 against Assam in 1956/57. Pradeep Sunderam of Rajasthan took ten against Vidarbha in the 1985/86 season for figures of 10/78.

Debashish Mohanty was the last bowler before Rex to take all ten wickets in an innings in domestic cricket, East Zone against South Zone in 2001.

But the more famous bowlers who have achieved the feat were Jim Laker (against Australia) and Anil Kumble (against Pakistan). They remained the only bowlers to take 1ll ten wickets in international cricket (Tests).

Cooch Behar Trophy is the Under-19 four-day cricket tournament.

Manipur are competing in the BCCI sanctioned national tournaments for the first time.