We Do Have A 'Dog' In The Ongoing Shia-Sunni Fight In West-Asia, Says Israeli Minister Michael Oren

'Iran threatens to destroy us and also these Arab regimes and dynasties. There is tremendous confluence of interest between us and them' 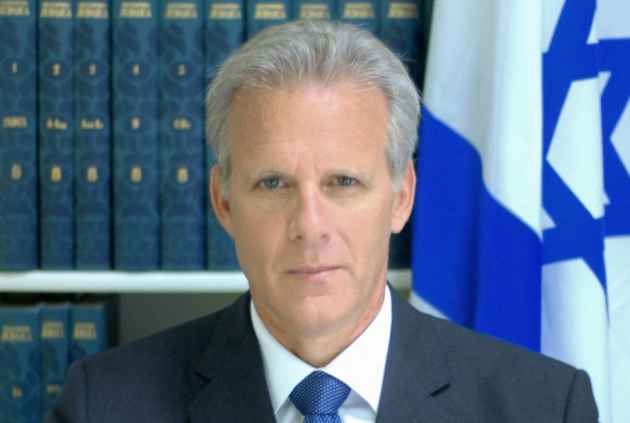 Dr Michael Oren wears several hats: he is a diplomat, a historian and a politician. Currently, he is the deputy minister for diplomacy in the Israeli Prime Minister’s Office. Dr. Oren is also Prime Minister Benyamin Netanyahu’s “special envoy” tasked with strengthening Israel’s bilateral ties with countries like India. He was recently in Delhi to hold talks with key members in the Narendra Modi government. He took time from his hectic programme to talk to Pranay Sharma on the current situation in a volatile West Asia, of Russia’s growing role in the region and on Indo-Israeli ties that have reached a new high after PM Modi’s visit to the country. Excerpts from the interview:

West Asia has been on the churn for a while with wars in Iraq, Syria and Yemen and also the rise of several non-state actors. What do we expect to see in the coming days?

As a historian I would say that there is enough of a problem predicting the past and I don’t want to embark too deeply on prophecy. But one thing we can be sure of is that the Middle East will continue to be a source of profound instability, upheaval, violence and radical changes for the perceivable future.

This will go on for a while?

It is fashionable to say Basher Assad has won the Syrian civil war. But the question is, what has he won? Syria as we knew it does not exist anymore. It has been partitioned 15 different ways and the fighting is far from over. It is one thing to win an area but another to keep it. You can capture a city but holding it is a different issue altogether. Islamic extremism is an idea that will continue to grow and as the idea grows so too will the threat. Islamic extremism draws its strength from frustrations from modernity and the modern world is getting more complex. And people are getting more frustrated. We will have to deal with it. Even if ISIS is defeated, the idea of ISIS has not.

Syria, according to you, does not exist any longer. But will all these fast paced developments lead to redrawing of boundaries in the region as most countries came into being only about 100 years back?

Well the Sykes-Picot order has fallen apart and we don’t know what the new order will look like. It would be Israel’s preference of a benign balkanization of Syria, and none of these states that grow from it will be big enough to threaten one another and none will be able to threaten us.

But will it also affect the other countries?

We are dealing with a very fluid situation. The worst outcome for Israel and the Sunni countries like Jordan and the Gulf States would be an unequivocal victory by Assad, backed by Iran. That will enable Iran to create a Shiite crescent stretching from Teheran to Beirut and place the Iranian army on our northern borders and Jordan’s northern border and Iran will be able to create ports, airfields and army bases in Syria. That will be the worst outcome and we are committed to preventing that outcome.

Russia, more than the US, has become the major player in the region. Saudi Arabia, Iran or Israel all are trying to develop strong relations with Moscow. How do you see it?

Russia’s return to the Middle East has been one of the most dramatic events in the last five years. It overturned the 1970s policy of Henry Kissinger of keeping the Russians out of the region. For nearly 40 years America was the guardian of a certain level of stability in the region. But starting with the Barack Obama administration the US started pulling back and that created a vacuum. And geo-politics, like nature, hates a vacuum. Something has got to fill it up and the Russians saw an opportunity there. Putin’s government is highly activist; it is moving in to Ukraine, it is moving in Crimea. What they saw was 30 years of humiliation since the fall of the Berlin Wall with the expansion of NATO and now they are pushing back. From Israel’s point of view has the Russian presence in the neighbourhood been a good thing?

No. We have a complex relationship with Russia. On one hand, it is a friendly relationship. Excellent trade, one out of every seven Israeli speaks Russian. PM Netanyahu has visited Moscow four times in the last year and half. We have the Russians close to our border and we don’t want a clash with them. They are supporting what we consider the wrong side in the Syrian conflict and their forces are operating very, very close. We have set three red lines with the Russians—one is anyone shoots at us from Syria; we are going to shoot back. Two, if Iran tries to provide Hezbollah with precision guided missiles or any advanced weaponry, we will stop them. And thirdly, if Iran tries to establish air force base or ports in Syria, we will stop them.

Does this mean you strike a balance between the US and Russia?

No, it is not a ‘zero-sum’ game. It is not that if we get close to Russia we create distance in our relations with the US. The reason why our Prime Minister goes to Russia so often is that we don’t want a conflict with them. But our PM goes to Washington to discuss aid and cooperation on intelligence etc. Because the Russian economy is not strong, one of the ways the Russians generate income is through arms sale. And they are very good. The advanced systems that they sell, pose a challenge to us. So among the discussions that we have with the Russians is to show restraint to armies and organizations such as Hezbollah.

Israel had some issues with the Obama presidency, has that changed under Donald Trump?

Yes. I am working with the Trump administration and the biggest difference is that in the Obama administration, Israel was considered as part of the problem. But Trump sees Israel as the solution.

How are your relations with India?

Israel and India not only have a strategic relation but also a spiritual one. These are two countries which have most impacted human history. India is the cradle of great civilization, great religions, world religions and so is Israel. We have today a very similar ability to balance respect for tradition, legacy, a heritage of the past and blend it with the commitment to moving ahead in a very innovative way with the future. You are aware of a huge support for the Palestinian movement in India. Does it come in the way of developing strong Indo-Israeli relations?

So, what is the problem?

When we talk about creating a Palestinian- West Bank state, we are talking about a time when states in the Middle East are falling apart. We are not sure whether the Palestinian leadership is capable of controlling the territory it normally controls, we are not even talking about controlling other territories. What will happen to us if it falls apart? What if it becomes like Lebanon, Gaza, or Syria? Because we are living there we have a different perspective about it than someone from India.

Much of the attacks on Israel came from the Arab world. Yet, your main concern is Iran. Why? Is it because Iran alone challenges the dominance you have on the nuclear issue in the region?

It has happened because of the Iranian regime that seized power in 1979. That regime’s goal is of dominance, of having the Shiite version of Islam in the Middle East and beyond. It has global aspirations and the nuclear issue is a major means of achieving that goal. It is also the largest state sponsor of terrorism in the world. It is constantly undermining pro-western governments throughout the Middle East. It also openly declares its intentions of destroying us. That is mainly because the only element that is standing between them and creating an Iranian Empire in the entire Middle East is the small state of Israel.

There is an ongoing war between the Sunni and Shias—led by Saudi Arabia and Iran for dominance. Does Israel have a “dog” in this fight?

We do. We are closer to the Sunni Arab world. President Obama always wanted to bring the Israelis and Arabs closer together for peace. He has brought us closer not for peace but for our common concern on Iran. Iran threatens to destroy us and also these Arab regimes and dynasties. There is tremendous confluence of interest between us and them. So as you put it, we do have a ‘dog’ in this war.