We Have Much Better Awareness Of Maritime Domain: Navy Chief 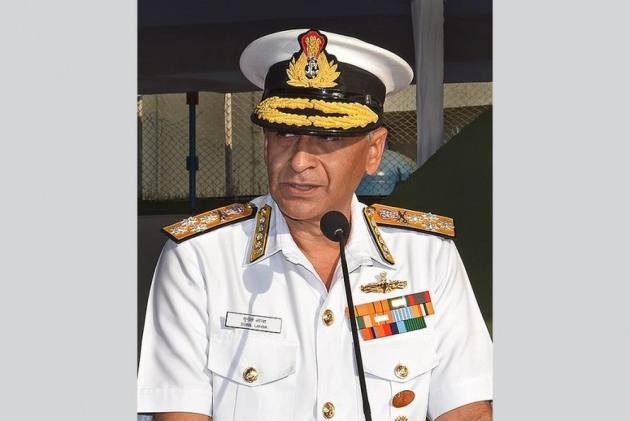 The IFC-IOR is a separate platform and all members of the Indian Ocean Naval Symposium (IONS) are expected to be part of it, he said.

"We have the approval from the Government of India to get in touch with a number of nations on technical agreement on exchanging information on white-shipping," Lanba told reporters on the sidelines of the 10th anniversary seminar of IONS.

The IONS, launched in 2008, seeks to increase maritime cooperation among navies of the IOR.

The Navy chief said India has signed an agreement on exchanging information on white-shipping with 18 countries and operationalised 11 of them.

Responding to a question on initiatives taken by India to overcome growing Chinese influence in the Indian Ocean, Lanba said a mission-based deployment of Indian Naval ships has been undertaken in "our areas of interests".

Prominent mission-based ship deployments have been made in the Gulf of Aden and other areas including Andaman Sea, Arabian Sea, Bay of Bengal and southern and central parts of the Indian Ocean.

Besides this, patrolling by aircraft is also being carried out regularly, he added.

"We keep a close eye and monitor the movement of all shipping which includes PLA, Chinese Navy. We have a much better awareness of the maritime domain," Lanba said.

He said a number of foreign cooperation initiatives have been taken by the Government of India with like-minded nations in the region.

"This is how we are tackling the growing influence of Chinese Navy," he added.

Earlier, addressing the seminar, the Navy chief said the IFC-IOR would comprise personnel from many countries.

The IOR has a diverse set of littorals and island nations, each with their unique needs, aspirations, interest and values, he added.

Rise in maritime piracy in the region has had its impact worldwide, which shows how important these waters are to the nations and economies the world over, Lanba said.

Although concerted efforts by the navies and maritime security agencies over the last few years have significantly reduced this threat, other challenges persist, he said.

"The seas are too large for any one navy to secure single-handedly and our ability to work in coordination with other stakeholders would enhance the effectiveness of our individual efforts manifold," he said.