We Still Don’t Know Where Is The Independent Manipur MLA Who Was Taken Away By CISF, Says Congress Observer Ramesh Chennithala

Chennithala, Congress’s north-east Observer and chairman of the screening committee for the just-concluded assembly elections in Manipur, talks to Outlook on the assembly elections, Rahul Gandhi’s leadership, CPI(M)-BJP clash in Kerala and more. 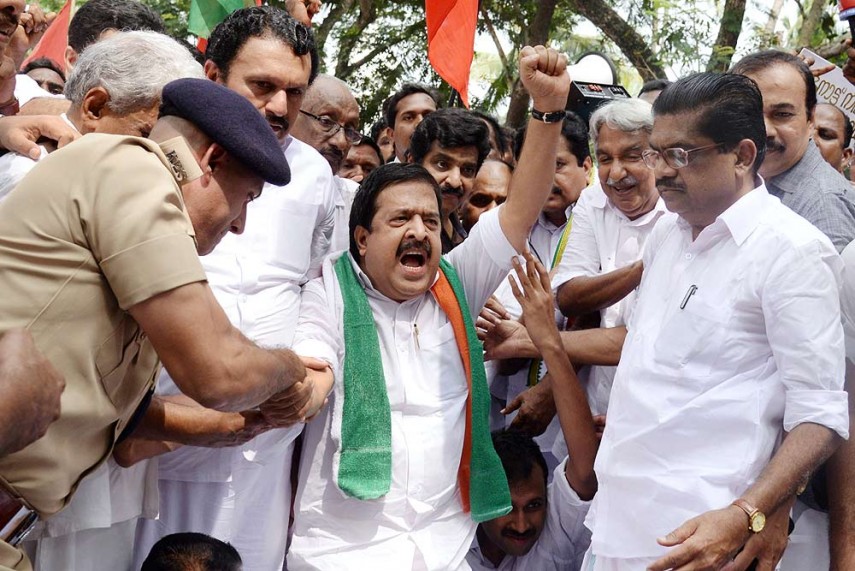 Ramesh Chennithala, Congress’s north-east Observer and chairman of the screening committee for the just-concluded assembly elections in Manipur, said that all democratic practices were subverted in the state by the BJP to form the government there. Chennithala, also the Opposition leader in Kerala, alleged that the fate of independent MLA in Manipur, Ashad Uddin, who went missing after the elections, is still unknown (The MLA in question has reportedly joined the government as parliamentary secretary).  Rejecting the call for Rahul Gandhi’s resignation by a youth Congress leader in Kerala, Chennithala said there is an organized campaign against Rahul Gandhi.

Congress has accused the BJP of stealing the governments in Goa and Manipur. As the party’s north-east Observer and chairman of the screening committee for Manipur, you were closely involved with the election processes in the state. Can you please tell us what went wrong for the Congress in Manipur?

In Manipur, we consecutively ruled the state for three terms. This was going to be the fourth term for Ibobi Singh. When we went to the people, from the beginning, we were aware that people are supporting the Congress party. We were very confident that we will be coming back to power. And Congress emerged as the largest political party in the house of Manipur. It is quite natural that the first party should be called to form the government. If the first party fails, then only the second party will be called.

All the democratic practices were trampled upon in Manipur. Even before the announcement of the results, Amit Shah, I heard it on TV, said they were going to form governments in Goa and Manipur. In Manipur, where I was in-charge, we had 28 MLAs with us in the 60-member assembly. One independent, Ashad Uddin, was in support of us. He was coming from his constituency to Guwahati and then to Imphal. When he reached Imphal with a Congress minister, he was suddenly taken away by the CISF people. He was sent out of the airport. This independent MLA was taken into custody by the CISF for one hour. After one hour he was sent by a special flight to Guwahati. Till now we don’t know where he is. That was the first blow on democracy by the central government. Secondly, how can the governor accept an MLA elected on Congress ticket who shifted his loyalty to BJP. It’s all anti-democratic activity. These people captured power in Manipur through money and muscle power. Chief Minister Biren Sing is not having the mandate of the people. It’s a product of the central government.

Whose fault is this? Goa state Congress has blamed the central leadership of the party for not claiming stake to form the government.

I am not aware of (the situation in) Goa. I was in charge of Goa for a long time and during my time the party had come to power there. The problem is that in smaller states with smaller assemblies, the central government can do a lot of politicking. Unscrupulous politicking has taken place in both these states and that is how BJP has come to power. Otherwise, they would not have come to power. That’s the saddest part of the democratic processes in our country.

Was there lack of management on part of the Congress’s central leadership?

I don’t think so. I spoke to KC Venugopal. I couldn’t get Digvijaya Singh (Both in charge of Goa). They couldn’t come to an agreement. They thought that they would be called by the governor as the first party. That is why they have gone to the court. I don’t think there is any lack of management after the elections.

One of your own lawmakers turned a turncoat in Manipur after the elections. How can the party prevent such moves?

That is not acceptable. He is still a Congress member. Elected on Congress symbol, how can he take an oath? So, we are going to challenge that.

A Youth Congress leader from your own state, Kerala, has asked Rahul Gandhi to step down if he is not capable of leading the party. What’s your take on this?

It is not acceptable. There is a concentrated effort against Rahul Gandhi from some quarters, especially from BJP. There is an organized campaign against him. Ever since Rahul Gandhi has come to the scenario, Congress has been working hard and he has been trying his level best. In UP, everybody knows that Congress has not been in power for the last 25 years post Mandal Commission. He doesn’t have a magic wand in his hand. But Rahul Gandhi travelled for more than two months the length and breadth of UP. The point is that BJP has won UP. But, you look at Goa, Punjab and Manipur. Out of five elections, Congress has done very well in these states. But, nobody is saying that this is because of Rahul Gandhi. There is an organized campaign against Rahul Gandhi which is not acceptable for 99 per cent in the Congress party and the people at large. I have spoken to the the young man in Kerala, CR Mahesh, who made a statement on Facebook. He said he didn’t say anything against Rahul Gandhi and is now convinced. Unfortunately, I don’t know why he has given such a statement.

So, this is not a voice from within the party?

Congress in Kerala appears to be going through an uncertain period after PCC president VM Shudheeran quit the top post.

VM Sudheeran quit the post. Unfortunately, Sonia Gandhi has gone abroad. That is why this delay. I feel that immediately after Sonia ji’s return, the (new) president will be appointed.

What will be the new leadership like? Can we expect a young leadership?

That is up to the Congress high command.

Are you in contention for the PCC president’s post again?

I was the PCC President for nine years. Now I am the Congress Legislative Party leader.

The LDF government in Kerala led by Pinarayi Vijayan is going to complete a year in office in May. How do you assess the Left rule in the state?

It is totally miserable. Law and order is worsening day by day. There is no safety for women and children. Political killings are on rise. Prices of essential commodities are on rise. There is no market intervention. The government has no control over the situation. This is the first time in the history of Kerala that IAS officers said they are going on leave together. There is no file movement. Secretariat employees are on strike. The government has not given any impetus for the state’s development in its first 10 months. Our plan expenditure is only 65 per cent even as only ten days are left for the financial year’s ending. Whereas, it was 96 per cent in the first year of UDF government. So this itself shows the callousness and total breakdown of official machinery. There is no coordination between the partners of the LDF. CPI(M) and CPI. People are very unhappy about the government’s performance. It will be demonstrated in the upcoming Malappuram by-election necessitated after the demise of E Ahamed. People are very upset with the total dictatorial way of functioning of the chief minister, (Pinarayi Vijayan).

BJP is pitching itself as a third force to be reckoned with in Kerala. Do you see the state politics turning from bi-polar to tri-polar in the coming years?

I don’t think the BJP will make any headway in Kerala. This time they only got 14 per cent of vote. Last time they got 10 per cent. They cannot become an alternative to both the LDF and the UDF. They are trying their level best with their central government though.

CPI(M)-BJP violence is turning uglier in Kerala. Is there a way out?

There is some kind of peace after an all-party meeting. But, it is still going on. It is not completely subsided. Both the BJP and the CPI(M) want clashes everywhere so that they can control their party people in the lower level. If both the parties lay down arms, there won't be any political violence in Kerala. Political violences in Kerala are the creation of these two parties. But, people of Kerala want peace and tranquility. Both ruling parties- one in the Centre and one in the state- are the culprits.

Any attempt on the part of the Congress to bring back its disenchanted ally, Kerala Congress (Mani) group?

We are already requesting them to come back. They are supporting our candidate in the Malappuram by-election. I think they will all come back within no time.

Do you see Malappuram by-election, due in April, as a referendum on the Left government?

That is the words of Kodiyeri Balakrishnan, CPI(M) state secretary.  I accept it and I welcome it. Let it be considered as the referendum.