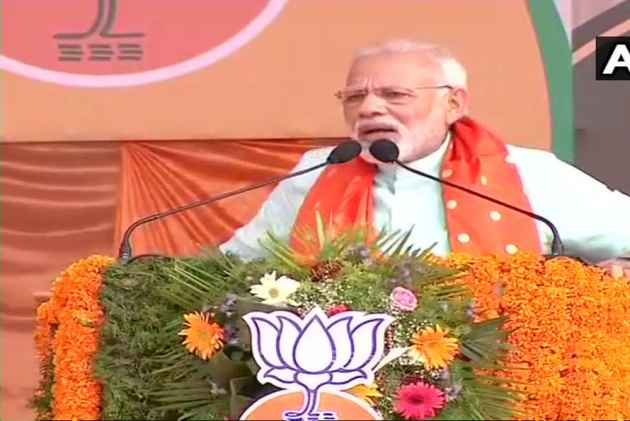 Prime Minister Narendra Modi today assailed the Congress government in Karnataka for initiating the culture of "ease of doing murder", as he launched the second leg of his campaign blitz in the state for the Assembly elections.

He also accused the successive Congress governments at the Centre of allowing a handful of people to "loot" banks while denying loans to poor.

The prime minister unleashed an all out attack on Congress president Rahul Gandhi and dared him "to speak in any language" for 15 minutes about the achievements of Karnataka's Siddaramaiah government without referring to a piece of paper.

"I dare the Congress president to speak in Hindi, English or the mother tongue of his mother to deliver a speech in Karnataka for 15 minutes, without reading out from a piece of paper, on the achievements of the party government... people of Karnataka will draw their own conclusion," he told an election rally at Santemaranahalli in Chamaraja district.

Modi was responding to Rahul Gandhi's dare to him to allow him to speak for 15 minutes in Parliament on various issues, including corruption, and that the prime minister will not be able to sit for 15 minutes.

"His speaking for 15 minutes will itself is a big thing. And when I hear that I would not be able to sit, I think...Wow, what a scene it is? Congress president, Sir, we cannot sit before you. You are 'naamdar' (famous), while I am 'kaamdar' (ordinary worker). We have no status to sit in front of you," he said.

While slamming Gandhi, he asked him also to pronounce the name of Visveswaraya five times, apparently taking a swipe at the Congress leader who struggled to pronounce the legendary engineer-scholar's name at a public rally whose video had gone viral.

Modi claimed over two dozen BJP workers were killed under the Congress government in Karnataka in political violence.

"What was their crime? It was that they were opposed to your views, they raised their voice for the people of Karnataka.

"We want to encourage the ease of doing business, they (the Congress) have initiated the culture of ease of doing murder," he told another election rally in Udupi.

He asked the audience whether or not the Congress should not be banished from Karnataka and the country, and should not the mentality of political violence end. A lustily cheering audience responded with shouts of "yes, yes".

Modi also referred to Mahatma Gandhi's insistence on disbanding the Congress after independence, and said with the party facing defeat after defeat in the last four years, the Father of the Nation's "last dream" was about to materialise with its decimation in the Karnataka polls.

Speaking about the pioneering work done in the banking sector in Udupi, Modi said despite the nationalisation of banks poor remained out of the banking system until his government started helming the country.

"There was a time when the poor had no bank accounts, they could not even think of going to a bank. They were out of the economic mainstream, out of the banking system. We started the Jan Dhan scheme for them.

"The earlier Congress governments allowed a handful of people to loot banks, but denied loans to the youth, farmer, the poor," he said.

Prefacing his speech with a reference to the BJP and its forerunner Jana Sangh's connect with Udupi, the prime minister recalled how people of the city voted for the nominees of the saffron party 40 years ago when their flags hardly fluttered anywhere else.

Alleging that the state government was patronising the sand mafia, Modi said that prompted the high court to pass strictures against it. "Should not a government that loots even sand be eased out?" he asked.

Modi resumed his campaign in Karnataka after a long break --the last rally he addressed was in February-- as he sought to give a big push to the BJP's efforts to return to power in the state for a second time unseating the Congress. He is slated to address 15

Attacking dynastic politics in the Congress, Modi took a dig at Chief Minister Siddaramaiah for contesting from two seats and fielding his son in another.

Addressing the Santhemarahalli rally, Modi termed it as the Kannada version of Congress' family politics.

"I was reading a newspaper a couple of days ago and I found that in Karnataka 2+1 formula is going on. This is nothing but the Kannada version of Congress' family politics," he said.

He also spoke about the government promulgatin an ordinance to pave the way for providing stringent punishment, including death penalty, for those convicted of raping girls below the age of 12 years.