Mohammad Jawed has been demanding that the Centre release funds allotted by the UPA government in 2013-2014 for setting up a centre of the Aligarh Muslim University (AMU) in Kishanganj. 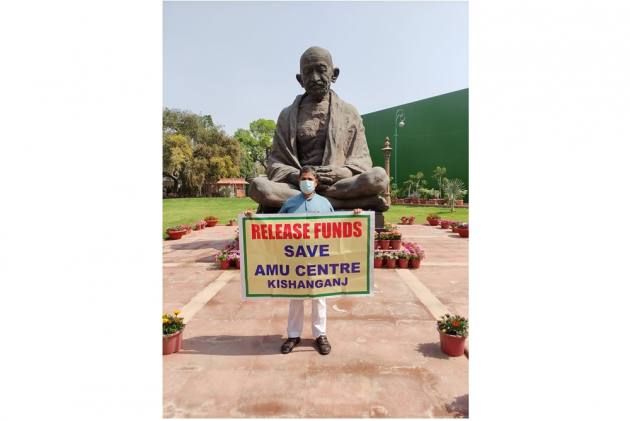 Since March 8, on every working day of the Parliament’s ongoing budget session, Mohammad Jawed, Congress MP from Kishanganj in Bihar, has stood in protest in front of Mahatma Gandhi’s statue within the Parliament complex. Jawed’s silent protest has attracted neither raucous media attention nor loud expressions of solidarity from his Parliament colleagues barring occasional expressions of support from a handful of MPs such as Shashi Tharoor, Manickam Tagore, Saptagiri Ulaka, and a few others.

Jawed’s protest is over an issue that rarely triggers political hysteria or that familiar cacophony by the media – education infrastructure. To be precise, Jawed has been demanding that the Centre release funds allotted by the UPA government in 2013-2014 for setting up a centre of the Aligarh Muslim University (AMU) in Kishanganj. The banner he holds up every day of his protest reads: ‘Release Funds Save AMU Centre Kishanganj’ – not exactly the kind of slogan that stirs up passions, unfortunately.

“I represent 30 lakh people of Kishanganj in the Lok Sabha and I come from the most backward part of Bihar – Seemanchal (constituting districts of Kishanganj, Purnea, Araria and Katihar), that has a population of over a crore people but has no education infrastructure to cater to the needs of our youth. The UPA government’s decision to open an AMU Centre in Kishanganj had come as a ray of hope for lakhs of our youth who want to study and make something of their life but seven years after it was proposed, the Kishanganj AMU Centre is on the verge of closure for lack of funds,” Jawed tells Outlook. Jawed says there are only six government colleges in his constituency and in seven of Kishanganj’s 11 blocks there isn’t a single college.

Earlier this week, as the Lok Sabha discussed the demand for grants under control of the Ministry for Education, Jawed made an anguished appeal in the House, stating that he had repeatedly written to the Prime Minister and union ministers for home, finance and HRD seeking their help in getting the long due funds released but to no avail. “I come from a land that had Nalanda and Vikramshila, which imparted education to the world in ancient times, but today it is our misfortune that we don’t have infrastructure to educate our own people,” Jawed says.

The Kishanganj MP insists that his efforts to see a flourishing AMU Centre in his constituency must not be condensed into the divisive Hindu-Muslim binary. Yet, it is difficult to ignore the fact that Kishanganj has a near 60 per cent Muslim population while the community comprises an average 47 per cent of the population of the four Seemanchal districts (Bihar’s statewide average Muslim population is 17 per cent) – and that the institution in question is a branch of the Aligarh Muslim University. “If the AMU Centre begins operations and fulfils its mandate, it won’t just cater to Muslims, will it? People from other religions will study there too. If it’s the name that is a problem, I urge the government to open any other educational institution – open a centre of the Benaras Hindu University (BHU) but please give our youth a chance at good higher education,” Jawed says.

There are ample reasons why the Kishanganj MP’s demands must force affirmative action, urgently so. A 2017 study titled ‘Status of Muslim Youth in Bihar, Quantitative and Qualitative Assessment’, sponsored by the United Nations Population Fund (UNPF), Bihar Office, had highlighted some grim facts about the state of education and its direct correlation with other human resource and welfare indices. The study, that also analysed official data from the Census, 2011, found a substantial difference in the literacy rates of rural and urban Bihar – 54.3 per cent and 69.1 per cent respectively.

The study pointed out that the literacy rate among Muslims in the backward Seemanchal districts was among the lowest in the state. It said the literacy rate among Muslims in Araria and Purnea was 48.3 per cent and 43.1 per cent respectively while Kishanganj registered 53.1 per cent and Katihar 45.6 per cent. Conversely, this data set would suggest that the ‘illiteracy’ rate in these four districts was considerably higher than the average pan-India illiteracy rate even among Muslims, which the Census 2011 pegged at 42.7 per cent; the highest among all religious communities in India. India’s national literacy rate is 74.4 per cent as per Census 2011 or an even greater 77.7 per cent according to the National Statistical Commission survey of 2018.

The 2017 study, which based its conclusions in part on field surveys that involved interaction with Bihari youth in the 15 to 29 years age bracket, also pointed at another interesting facet; something that further buttresses the need for more educational institutions in the state, particularly in the Seemanchal districts. The study highlighted a major disparity that often gets ignored due to the umbrella concept of literacy – the actual break-up of ‘literate’ Muslims in Bihar as per their level of education. It nuanced the Census 2011 data to show how educational qualifications among Bihar’s Muslims remained largely confined to school education and that only a meagre 2.4 per cent of Bihar’s Muslims accounted for ‘graduate and above’ while another 0.9 per cent were diploma holders.

That just 2.4 per cent of Bihar’s Muslim youth could get enrolled in ‘graduate and above’ courses must also be read with an older, albeit relevant, finding of a 2004 study conducted by the Asian Development Research Institute (ADRI). The ADRI report titled ‘Socio-economic and Educational Status of Muslims in Bihar’ had suggested a strong desire among Bihar’s Muslims to send their children for higher education; even if this aspiration appeared modest, ripe with gender disparity, and also lower compared to other religious communities. The 2004 survey had pegged aspirational literacy rate for college education at 37.4 per cent for boys and 13.6 per cent for girls among Muslim households in rural Bihar and 54.5 per cent for boys against 36.1 per cent for girls in Muslim families in urban Bihar.

Jawed’s argument that the Seemanchal districts are in desperate need for better education infrastructure and avenues for higher education are supported by fact. The 2017 study said, “there are 769 degree colleges in Bihar (276 of them being government/constituent colleges) for 196 towns and 593 blocks. This means, on an average, there is hardly one college in a block.”

The story of the AMU Kishanganj centre also highlights how poorly thought out central schemes can be, possibly more so when they are meant for rural areas or ostensibly for benefitting religious minorities that have been left behind in India’s skewed development model. The UPA government’s belated realisation for setting up the Kishanganj centre had come in the last year of its second consecutive term in office and only after much public outcry over the delay in implementing recommendations of the famous Sachar Committee report that highlighted various causes for immediate action to uplift religious minorities. The UPA government had approved a fund of Rs. 136 crore for the Kishanganj Centre – another four AMU Centres were proposed for Maharashtra, Madhya Pradesh, Bengal and Kerala – while releasing the first instalment of Rs. 10 crore.

The Bihar government, after delays and protests by people of Seemanchal, awarded 224.02 acres of land in Kishanganj for the centre. In 2018, the land allotted got embroiled in legal disputes with the National Green Tribunal (NGT) as it was located near the Mahananda River. Thus, the centre has been functioning out of a rented dilapidated building, awaiting disposal of the petition by the NGT against the earmarked land. Besides, the Kishanganj AMU Centre had initially started out by offering MBA and B.Ed courses but in 2018 the B. Ed course was halted following objections by the National Council for Teacher Education (NCTE).

Last year’s Bihar assembly polls saw the Kishanganj AMU centre becoming a political issue in the Seemanchal region with Hyderabad MP Asaduddin Owaisi’s AIMIM declaring that if its candidates from the region were elected, they would ensure quick remedies for the problems facing the institution. The AIMIM made impressive gains in Seemanchal; its candidates won four of the six assembly segments that fall within the Kishanganj Lok Sabha constituency at the cost of the Congress and RJD. There’s been complete silence on the issue since then by the AIMIM legislators in Bihar though Owaisi has raised the issue of problems at the Kishanganj AMU Centre in the Lok Sabha, even if he hasn’t joined Jawed’s protest.

Outlook reached out to all four AIMIM legislators from Kishanganj – Amour MLA Akhtarul Iman, Bahadurganj MLA Anzar Nayeemi, Kochadhaman MLA Izhar Asfi and Baisi MLA Ruknuddin Ahmed – to enquire their efforts on the issue but received no response. Jawed says he doesn’t wish to go into “why the AIMIM MLAs have now abandoned their commitment towards the fight for AMU Kishanganj” because he feels the “issue of education must not be seen through the prism of politics”. Jawed has now started a petition on social platform Change.Org seeking public support for his campaign and has received over 10000 endorsements so far. “My campaign for a flourishing AMU Centre in Kishanganj and against the problems and disparities that the youth of Seemanchal face due to poor education infrastructure will continue,” Jawed says, adding “the Prime Minister talks about Sabka Saath, Sabka Vikas but can this ever be achieved without Sabka Education”?

The smorgasbord of problems and challenges facing the Kishangarh AMU centre may just as well be extended in varying degrees to other minority institutions in the country and, as in Seemanchal; these too may suggest similar correlations with welfare indices in the regions that these education centres are meant to serve. But then, no one seems to be listening.