'I see the struggle continue till November-December. I’ve no intention to return home till the goal is achieved,' Rakesh Tikait said. 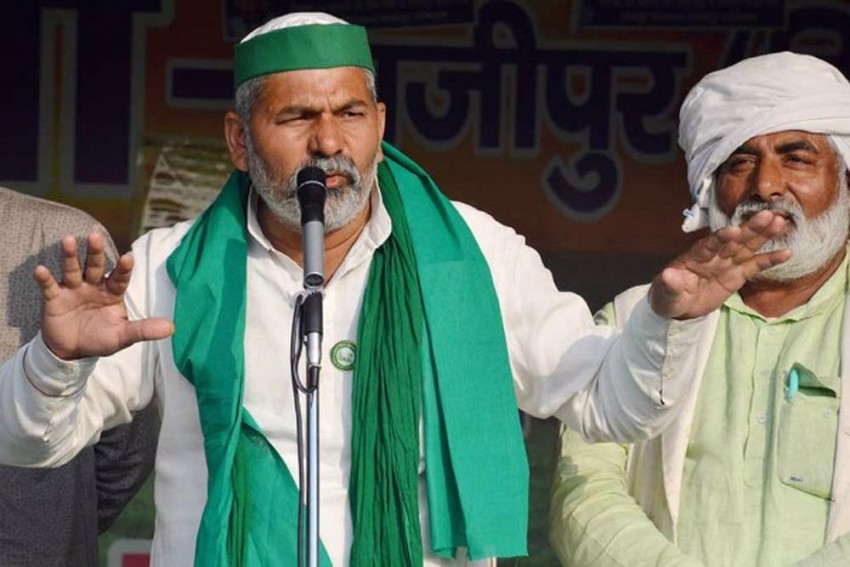 Farmer leader Rakesh Tikait is busy travelling across the country to garner support against the three contentious agriculture laws. After a rally in Bengaluru on Monday, March 22, it was time to rush to Jaipur for another the next day.

It was while in transit that Outlook managed to catch up briefly with the 51-year-old national spokesperson of the Bharatiya Kisan Union (BKU).

“We have a long summer ahead. The movement will go on for quite some time. The government is not ready for talks and till they do, till they accept our demands, the farmers will not move,” stated Tikait.

Rakesh Tikait, who holds the legacy of a famous farmer leader like Mahendra Singh Tikait, have many promises to keep. His father made governments accede to farmers’ demands several times.

“I see the struggle continue till November-December. I’ve no intention to return home till the goal is achieved,” he said.

But the government seem firmly rooted against a repeal of the laws. The three laws are The Farmers’ Produce Trade and Commerce (Promotion and Facilitation) Bill, 2020 which allows farmers to sell produce outside the Agricultural Produce Market Committee (APMC) regulated markets; The Farmers (Empowerment and Protection) Agreement on Price Assurance and Farm Services Bill, 2020 that makes provisions for the setting up of a framework for contract farming; and The Essential Commodities (Amendment) Bill 2020.

Another contentious issue is the legalization of Minimum Support Price (MSP). Despite several assurances by the Centre, protesting farmers are not convinced about MSP continuing in future.

“We will approach the people. We will continue to hold meetings across the country. We are meeting farmers, explaining to them how the laws are against their interests,” said Tikait.

Farmers will be told that when they face problems selling their produce in mandi (APMC) or outside, they should take it to the respective District Magistrate, Sub Divisional Magistrate, or even the state legislative assembly and demand due to compensation.

“Farmers will request all of them to buy his crop at MSP,” he added.

After addressing a Kisan Mahapanchayat at Vidhyadhar Nagar Stadium in Jaipur on Tuesday, Tikait will travel across Haryana and Rajasthan, addressing several such meetings.

He is scheduled to return to the Ghazipur protest site at Delhi’s border on March 28, for five days. The tour will continue from April 2.

“We have to be prepared for a long struggle. This movement is for the liberation of farmers and it will continue till we achieve it…,” the voice was getting distant.

Perhaps Rakesh Tikait had embarked on another voyage – another destination.