On Thursday, Ghosh was allegedly chased and heckled by rebel GJM supporters, who gathered and raised slogans for saying 'no' to Gorkhaland. 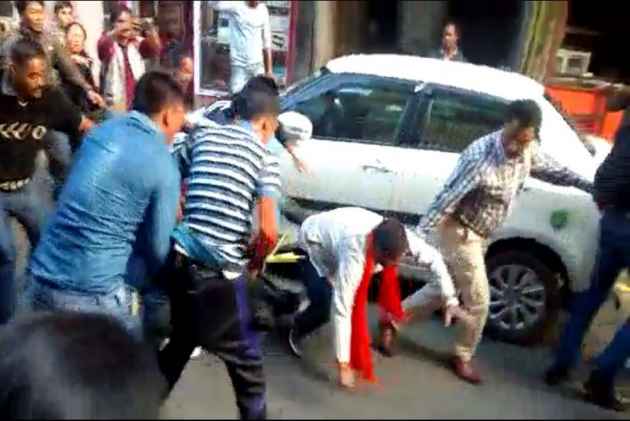 Chairman of the Board of Administrators for Darjeeling and expelled Gorkha Janmukti Morcha (GJM) leader Binay Tamang on Friday condemned the GJM activists for allegedly chasing West Bengal Bharatiya Janata Party (BJP) President Dilip Ghosh, adding that the BJP has hurt the sentiments of the people of Darjeeling in regard to the Gorkhaland issue.

On Thursday, Ghosh was allegedly chased and heckled by rebel GJM supporters, who gathered and raised slogans for saying 'no' to Gorkhaland.

Tamang said: "I strongly condemn the act taken up by the GJM activists. I also request the BJP leaders not to play with the feelings of the Darjeeling people. They have been hurting the sentiments of the people because this Gorkhaland issue is prevailing since ages".

"We have helped BJP win Lok Sabha elections from Darjeeling twice in the past. We will not tolerate any attempt by them that disturb the hills. Nobody should try to disrupt normalcy in the hills," he said.

A scuffle erupted between BJP supporters and the agitators when Ghosh, heading a party delegation, arrived at the venue in the evening where a 'Vijaya Sammelani' of party workers was scheduled to be held.

As soon as he arrived, the agitators shouted slogans demanding that the BJP delegates leave the hills and showed them black flags. The BJP supporters were far outnumbered by the agitators, who beat them up.

The BJP state chief tried to pacify the agitators but failed. He was then heckled following which he cancelled the meeting and lodged a complaint at a nearby police station.

Ghosh told reporters, "All of a sudden they rushed to the dais and heckled everybody including me. I tried to pacify them but they kept shouting slogans and pushing others. I left the venue and walked to the nearby police station."

He said, "On the way my party supporters, who were with me, were brutally beaten up by the agitators."

Darjeeling Superintendent of Police Akhilesh Chaturvedi said, "There was scuffle between two groups and a few people were injured. A case has been registered and we have started the investigation. The culprits will be arrested soon."

Rallies were taken out by the BJP in Kolkata as well as in Hoogly, Burdwan and several other places in the state to protest against the heckling of Ghosh. The party demanded immediate arrest of the culprits.

An angry Ghosh alleged that the attack on him and the BJP leaders was "pre-planned" and that he was not provided any security despite being an MLA.

"It was pre-planned attack. And I think this planning has its roots in Kolkata. The administration and police were just mute spectators as our supporters were beaten up and I was heckled. I was not given any security cover. I have lodged a police complaint about the incident," he said.

Earlier in the week, Chairman of Board of Administrators for Darjeeling Hills (BoADH) Binay Tamang warned Darjeeling MP SS Ahluwalia and State BJP President Ghosh against visiting the hills without any clear stand on the demand for Gorkhaland.

The West Bengal government had earlier in the month announced formation of the Board of Administrators on September 20, replacing the Gorkhaland Territorial Administration (GTA), and appointed Binay Tamang as its chairman.

The GJM had called off the indefinite strike in the hills last week after a marathon 104 days following an appeal by Union Home Minister Rajnath Singh.

The bandh was called in support of a separate Gorkhaland state in the Darjeeling hills.