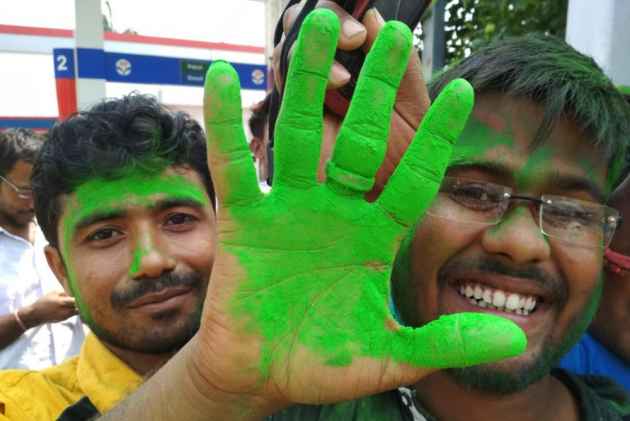 Since 8 in the morning, counting of votes has begun across West Bengal for the just-concluded rural elections. The Panchayat polls which has gained notoriety for the violence that accompanied it right from the nomination-filing stage and continued through the polling process, demanding re-polling in 572 booths in 19 districts, does not look set to end well either. Since early morning, reports of intimidation of counting officers and agents of different Opposition political parties have been coming in. In Nadia district, two counting centers in two places, namely Hanshinara and Santipur are said to be completely devoid of agents from Oppositon parties. It is alleged that they have been threatened and told to stay away.

There is also assumption that in most of the counting centers where Opposition agents are not turning up, it is because of fear.  During re-polling which took place on May 16, two days after the one-phase poll held on May14, there was tight security with police and paramilitary forces guarding the booths. This is supposed to have checked the occurrence of major violent incidents witnessed during poll day earlier. In one incident ballot boxes were lifted and carried out of a polling booth on gun point. In another, a polling booth was found to be completely deserted, devoid not just of voters but also election workers.

“The terror that has been created is limitless and this is exactly what the Trinamool has been aiming for,” said Chandra Kumar Bose, BJP leader. “They wanted to ensure an Opposition-free Panchayat and they have done everything to ensure that they get that. And that right under the noses of the institutions which are supposed to guard against such murder of democracy.”

The Opposition parties have declared complete lack of trust in the state election commission which is responsible for the conduction of “free and fair” elections in rural polls.
And even as the re-polling was going on and as the counting takes place today, a petition is being prepared for approaching the Calcutta High Court which essentially appeals for non-acquiescence of the poll process. “India is a democracy and we have the recourse to take corrective measure. Our only hope now lies in the judiciary because the West Bengal executive, legislature and the institutions which work under it have failed us.”

Bose is among the leaders who will submit the appeal to the Calcutta High Court. “It is not a political party decision of the BJP. It is an urgent appeal to the judiciary by the citizens of Bengal for restoration of democracy. It is being led by a newly-formed civil society comprising intellectuals and ordinary citizens.  The affidavit which has been partly drafted by one of the founders of the group, Supradip Roy, an eminent lawyer in the Calcutta High Court, makes specific observations.

“One of the key pointers of the affidavit is that the May 14 polls have violated the Supreme Court order which had ordered the state election commission to ensure security for everyone. Not just the voters and Opposition candidates but also the Trinamool workers and candidates ,” Bose observes. He points out that indeed most of those who died in the poll-related violence were from the Trinamool. They were members of the disgruntled, breakaway factions of the party who were contesting the elections independently because they had not been given tickets and workers who supported them. “The SEC has completely flouted that order and therefore stands in contempt of the Honorable courts of law. So we are now pushing for the punitive measures that the Supreme Court and High Court had declared, among which was the provision that victims of any violence would have to be compensated by the state and would even be extracted from the financial securities of individuals who are responsible maintaining law and order.”

West Bengal chief minister Mamata Banerjee has reportedly announced a 5-lakh rupee compensation to the families of victims but Bose says that they are demanding for “at least 1 crore”.

The rural polls have exposed the deep rot that has set in at the roots of the electoral system of Bengal.  Fear, desperation, helplessness and panic, emotions one can associate with society’s perception of crime now have become the overriding sentiments associated with elections.

In the midst of this the state election commissioner’s declaration that the counting of votes must be completed by the end of the day is astonishing. Usually, according to experts, the rural votes take between two to three days to be counted. The state’s chief election commissioner has suggested that if needed more tables should be added to the counting centers but in a situation where even counting duty officers are afraid to attend where are additional personnel going to be procured from?

A presiding officer, during Monday’s polling had gone missing from a booth in North Dinajpur District’s Raigunje. One day later his body  was found near a railway track. The allegation is that he was kidnapped by thugs for refusing to hand over the ballot papers they were demanding and then murdered. The 45-year-old man whose, family, wife and two children are inconsolable. “He had just gone out to work in the morning and never returned,” his brother howled. They are hardly concerned about the versions. The Opposition is demanding an enquiry into kidnap and murder but the police are not ruling out suicide.

The incident has incensed other polling officers in Raigung. During yesterday’s re-polling they refused to work unless provided security. During a visit of the SDO TN Sherpa, they demanded answers and the promise of safety. “Our families don’t want to see our dead bodies,” said one. An irate mob threw shoes at the official.

The Trinamool leaders have been pointing out that the culture of violence in elections was started during the previous regimes and cannot be stamped out at will. They also allege that Opposition political parties have deliberately created chaos and mayhem in order to destabilize the system. They claim that “outsiders” are being brought in to cause violence.

In the allegations and counter allegation, the victims of “democracy”, lying in the morgues and hospitals and crying in their homes don’t really care who started the fire. “No we don’t vote,” stated the women folk of a village in Purulia taking to reporters from television channel ABP Ananda. They said they would rather “protect their honor” than exercise their right to franchise. So in Bengal, it is one or the other…two mutually exclusive functions of democracy. In another village men who stayed away despite the re-polling option said “Are you crazy? They are saying go and vote and then if we do, they will come to my house at night, molest my mother and sister, drag me out and kill me.”   They know better than to go out and vote.