In Gujarat, The BJP Has Used Its Most Powerful Card, Prime Minister Modi

Both on the side of issues and organisation, my view is that the BJP is ahead, either because of its strength or the Congress’s weakness, or both. 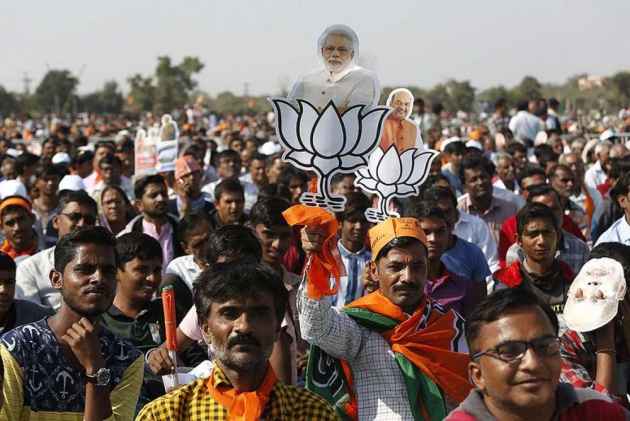 The ruling party for 22 years, the Bharatiya Janata Party, says it is about development. This is apparently a copyrighted word and development is something only the BJP can deliver, particularly under Narendra Modi.

What the BJP does is development and what other parties do is corruption, dynasty and so on. This formulation is childish in its simplicity but the remarkable thing is that the BJP has been allowed to get away with it by its opponents.

Even if we assume that what the BJP wants to talk about is development, meaning discussing data and policies that push economic and social growth, the party gets distracted. It wants to know what religion Rahul Gandhi is. The prime minister lies and says the Congress celebrated Hafiz Saeed’s bail. What does that have to do with development? Nothing, of course.

If the BJP claims to stand for development, the Congress is not clear about the issue in the election. Or at least it does not offer a single point like the BJP claims to offer development. The Congress party’s crown prince Rahul Gandhi wants to discuss corruption in the Rafale deal (for which he has got no support from the media) one day, and the next day it could be GST and demonetisation. This lack of focus has meant that the messaging against the BJP has been scattered.

The second thing, after issues, is organisation. Here the BJP is a formidable force. It is one of the most powerful political parties in the democratic world. It has a large grassroots presence that is managed by the Rashtriya Swayamsevak Sangh, the world’s biggest non-governmental organisation, with lakhs of members. These are dedicated and trained individuals, and in recent years they have also been highly motivated because of the charismatic leadership of Narendra Modi, whom the RSS grassroots adores. In any tight race, and one is not sure whether Gujarat is a tight race at the moment, the BJP's organisational assets will win the day for them.

On the other side, and since this is a two-party state we can only look at the Congress, it must be accepted that this level of competence is missing. The old Congress worker from the Seva Dal or the Youth Congress is absent. The structure has disintegrated and it is left to the individual Congress candidates to provide the manpower that will do the work. This costs money and many Congress leaders no longer invest as much money in elections because the party has been consistently losing.

Both on the side of issues and organisation, my view is that the BJP is ahead, either because of its strength or the Congress’s weakness, or both.

The third thing is the campaign strategy. The BJP has used its most powerful card, the prime minister, and has deployed him in dozens of rallies. Readers may have observed that though for many years he would only use Hindi even in Gujarati, these days he has started speaking in Gujarati. To me this indicates that he feels he needs to drive home the message and that may mean a closer race than the opinion polls show.

Modi is of course an outstanding public speaker and he is able to set the agenda in a way that Rahul Gandhi cannot. When Modi makes a big speech, he usually frames an old issue in a new way so well that the headlines must report it. An example: I sold tea, but did not sell the nation. Such clear, simple framing is a terrific asset to have in a leader. On the other hand, the Congress not only cannot set the agenda but must also keep defending itself on non-stories, such as whether Ahmed Patel was wrong to be a trustee in a hospital and whether Rahul Gandhi is Catholic.

The Congress has however managed to do one thing with competence: it has brought in the three large dissenting groups that had mobilised in the last few months. The Patidars, the Dalits and the OBC kshatriyas, led by Hardik Patel, Jignesh Mewani and Alpesh Thakor, respectively. It would not have been easy to do this, given that the three groups have contradicting demands. And it would not have been natural for these groups to align with Congress given that all three mobilisations were apolitical and spontaneous, but the Congress has managed to pull it off.

My guess is that this is the doing mainly of Ahmed Patel.
The BJP is worried by this development, and we can observe that in the many statements from its leaders, particularly the chief minister, which are aimed at breaking the alliance.

The question is: Will it be enough to defeat the BJP? My view is that this election will be determined above all by turnout. Gujarat is a high turnout state and the BJP, even if it leads opinion polls, must ensure that its base comes out and votes. This may not be easy because it is fighting a defensive campaign. The Congress can be confident that, even though its base is smaller, their voters will turn out because they are angry.

In that sense the real issues in Gujarat, jobs and meaningful economic development, are against the ruling party, even if it pretends to be fighting on them.